Lynda E. - My Journey from Caregiver to Activist 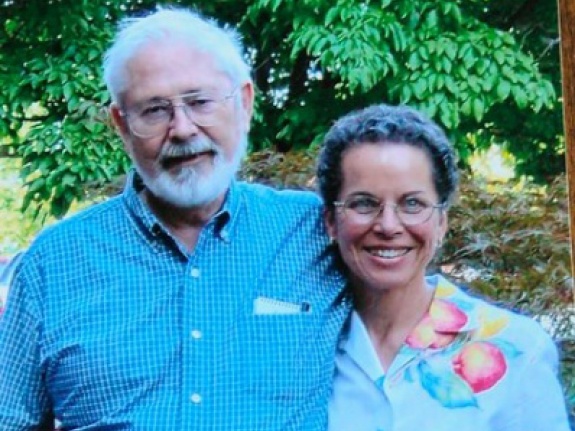 I've spent 18 years as an Alzheimer’s caregiver and the last four as an activist. This certainly was not my plan.  My 81-year-old dad began to show symptoms of dementia in 1994, the same year that former President Ronald Reagan published his now famous letter to the American people announcing his diagnosis of Alzheimer's disease. Three years later in 1997, at age 57, my husband Richard was diagnosed with mild cognitive impairment (MCI). MCI is a clinical diagnosis and an interesting term, but it is far from mild. It can involve problems with memory, language, thinking and judgment, and behavior that are greater than normal age-related changes and may signal the beginning of a slippery slope that takes you on a journey for which you are ill prepared.  My dad died in 2001 and my husband in 2012, both from Alzheimer’s disease.

Richard and I were at the University of California, Irvine when we first suspected something was not quite right. The Institute for Memory Impairments and Neurological Disorders (UCI MIND) had been established two years earlier as an organized research unit and was also an Alzheimer disease clinical center with the capacity of providing expert diagnostic services and recommendations for therapeutic and life style interventions.  While there is no known means to halt the progression of Alzheimer’s disease, the importance of early diagnosis and intervention in helping to delay its life robbing symptoms cannot be overemphasized. We were told that the conversion of MCI to Alzheimer's disease could occur in as little as three or as many as six years. In Richard’s case, it was 12 years. As the years passed, I began to believe that we had beat Alzheimer's disease, that we had arrested its course, and that we would live out our lives with inconvenience and infrequent atrocity, but not the deep and pervasive sadness of constant loss that is dementia.  But I was wrong. We were no match for Alzheimer's disease. No one is.

Like so many caregivers, for so many years, I was silent; I strove to protect my husband's dignity and say nothing to him or to others that would cause him to lose hope or become despondent. But all the while the door closed tighter and tighter and we became more and more isolated. For 12 years I watched over and cared daily for my husband, alone and without a break. My story is not unique.

In late 2009, I made the most wrenching decision of my life, to move Richard to an assisted living facility. By then it had become apparent to me that Alzheimer's disease could claim one or both of our lives and that caregiving exacts a tremendous toll on the caregiver's health and well being. I knew I could no longer sustain this level of care. But that knowledge did not make this decision, this move or the two that followed, any easier. The ensuing two and a half years were like living in a minefield strewn with impending crisis and unceasing grief.

In early 2010, I began to speak out.  At first and, still today, it was and remains very painful to share our personal experience; but I began. Somehow, as Richard waned, I became stronger for both of us. He was a man of great vision and boldness. He was unconventional and optimistic and we both shared an unshakable belief in the power of the individual to make a difference and affect positive change. I went to town halls and on advocacy trips to the state capital and organized a team for our local charitable walk. I consented to an interview with the Knoxville News Sentinel and spoke candidly for several hours with the journalist who came to our home. Our story ran locally and was picked up across the state.

I also began a campaign for an Alzheimer’s disease semipostal stamp that would raise money for research.  I wrote to all the living Presidents and First Ladies, and to every celebrity I could think of. At this point, I was unaware of the tireless work that had been done since 1999 by fellow advocate Kathy Siggins. I later discovered Kathy’s story on the Internet and contacted her. We joined forces to promote the call to create a semipostal stamp to draw public attention to the enormity of this health crisis and, as importantly, to help raise much needed funds for medical research through the voluntary purchase of postage stamps. The Help Stamp Out Alzheimer’s advocacy page was born.

We are all familiar with the inspiring words of Margaret Mead: “Never doubt that a small group of thoughtful, committed citizens can change the world; indeed, it's the only thing that ever has.” There is so much we can do, and I truly believe that it is through individual effort and action that we can make a collective difference.  Richard participated in clinical trails and, at death, generously donated his brain for autopsy. I’ve participated in walks and fundraisers and in a clinical study for cognitively healthy adults, and I’ve joined the Alzheimer’s Prevention Initiative’s Registry. I’ve written to every member of Congress, asking them to make the vision of the National Alzheimer’s Project Act a reality, to dedicate sufficient funding to advance research, to cosponsor the HOPE for Alzheimer’s Act (S.709/H.R. 1507) and the Alzheimer’s disease semipostal (S.1091/H.R. 1508).

With 16 other caregivers and their loved ones, I participated in an awareness project which was the work and inspiration of fellow advocate, Bakhus Saba of Canada, to create the video, Alzheimer’s/Dementia Knows No Borders. I am grateful to Bakhus for understanding how important it is to show the faces of dementia for these are the faces of our loved ones, individuals who have lived good lives and made lasting contributions to their families and communities, individuals who made our own lives so much better and so much larger, individuals who have been taken from us far too soon and too unkindly. It is through these activities that I try to make some sense of this senseless disease.

I am joined in this work by others who share the same passion for change and am honored to be a founding member of two national networks, ActivistsAgainstAlzheimer’s and WomenAgainstAlzheimer’s. We're a growing community of "engaged and enraged individuals" who have personal experience with the emotional, physical, and economic ravages of Alzheimer's disease and related disorders. We believe there has been too much suffering by too many for far too long and we are not content with incremental change. Together we are working to demand the urgency and commitment needed by our political, business and civic leaders to achieve the bold but doable goal of ending Alzheimer's disease by 2020. In a further effort to draw attention to the important work being done by USAgainstAlzheimer's, my son & I have recently opened an "Etsy" store, TwoAgainstAlz (https://www.etsy.com/shop/TwoAgainstAlz#). It is every bit as much about raising awareness, as about raising funds.

Alzheimer's disease and related disorders present a huge problem that requires us to use every means available to defeat it! It is relentless and we must be as well. Every 68 seconds another American develops Alzheimer's disease. First described in 1906, it remains the nation's sixth leading cause of death and the only illness among the top ten for which there is no known prevention, treatment, or cure. Alzheimer's disease has no survivors. It slowly and painfully takes away a person's identity, ability to connect with others, think, eat, talk, and walk. It strips you of your marriage, your home, your memories of the past and your hope for the future.

Like all chronic illnesses, it impacts the entire family, not just the unfortunate individual with the diagnosis. The emotional and financial cost to the family is immense. In 2012 American taxpayers spent $140 billion on Medicare and Medicaid expenses related to Alzheimer's disease; and caregivers provided an estimated 17.5 billion hours of unpaid care, valued at more than $216 billion. Unless we change the trajectory of Alzheimer's disease our nation will be overwhelmed by as many as 16 million individuals suffering from this disease at an annual cost of $1 trillion by 2050. They and their families will suffer immeasurably.

We lost our personal battle with Alzheimer’s disease but I refuse to lose the war. I hope my work contributes to the legacy that does, indeed, Help Stamp Out Alzheimer’s! When Richard died, I posted our picture on Facebook with these words, "Rest in peace, my beloved husband, and know that I will not rest until there is a cure."  I intend to keep my promise. Won’t you join me and all who long for a world without Alzheimer’s disease? Together we can and will make a difference.