Pauline B. - Me and My Soul Mate 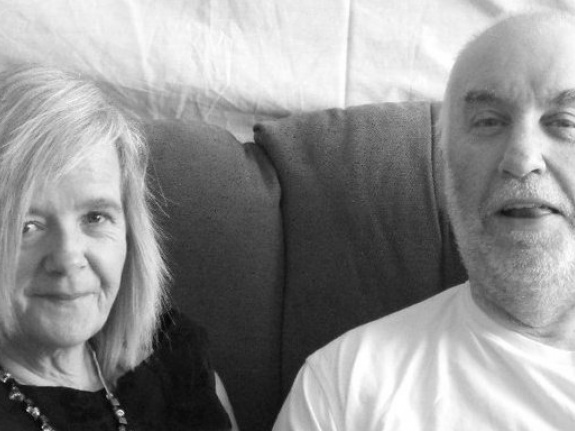 "Early onset Alzheimer's Disease..EOAD for short knocked on our door over 7 years ago and came in and wont leave till it had stolen my husband away from me, Mick and I met late in life on a blind date 18 years ago this July 1st,About 8/9 years ago there was warning signs looking back now I know this but did not know this at the time. I knew deep down something was just not right,Mick had a test at work he had to pass to stay as a controller as part of his job; He failed it three times, I could only explain it as by the time he put pen to paper he had forgotten the answer,He had to go back to being a bus driver a few accidents later which he thought was the parked cars fault and getting lost on route he was put on sick leave,I searched the internet and Alzheimer's and had a gut feeling,But been told this by a Neurologist was like been hit by lightning.

My soul mate I was devastated but decided life was too short to to dwell what the future held,I married Mick knowing he had EOAD ON JUNE ST 2007,We had a beautiful wedding with close friends and family, He cant remember getting married now, but the memories I have of the day I married my soul mate will live with me forever. We have since found out after many visits to the optician with glasses making not really any difference that Mick suffers form a rare type of Alzheimer's Posterior Cortical Atrophy also known as Benson's Disease. His eye sight now is poor he has lost his sense of taste. He needs help with almost everything now but the things I know he can do for himself I let him do.

I really had no one I could talk to who could truly understand what I was going threw I felt all alone till I went on the Alzheimer's web site and saw a picture of Rick Phelps and his group Memory People I clicked to join and have never looked back since. The warmth and love of this group is amazing. Mick today is a shadow of the man I met and if I knew then when I first met him what my life would like today would I still be hear would I still have married him there is only one answer to that. Yes I would....I love Mick with all my heart he is my soul mate and always will be till the end of time. I will keep fighting to bring Awareness to this dreadful disease thanks for reading.