Stefania S. - Beside the Mountain 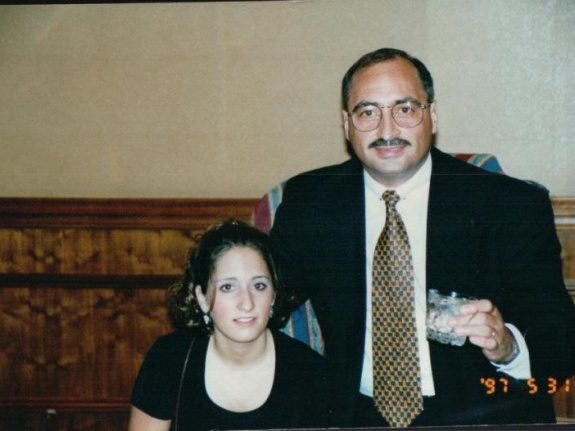 As I grew older, my father grew younger. I was 17 when my father ran away from home, leaving the television on behind him, the remote control lying at the base of the recliner that was still extended. I was supposed to be looking after him that afternoon as he sat in his recliner watching the stock market channel, staring at the numbers, forgetting each and every sign and symbol. I remember trying to keep my heavy lids from falling but finally giving in to the comfort of a woven, cotton blanket and familiar warm pillow. And when I finally awoke that afternoon, I saw that he was gone. He was 51 years old.

I have written a full length memoir about my father's illness. In this work, entitled "Beside the Mountain", I detail the story of my father’s demise from early onset Alzheimer’s disease. He was just 48 years old when he was first diagnosed, receiving a phone call one afternoon from a neurologist who told him he had the brain of an 85 year old man. At that time, my mother was 42. My younger sister, Nicole, was 8 years old. Flavia, my older sister, was 18 and I was 14.

"Beside the Mountain" challenges the idea that Alzheimer’s disease is blanketed beneath white and pale, loosened skin—the silent and unfortunate inevitable of so many grandmothers and grandfathers who inhabit the walls of nursing homes around the country. Early onset Alzheimer’s disease is a real threat, affecting about half a million Americans today. My story is of one such victim told through the memories of his teenaged daughter who helped care for him. I need my story to be told in order to help those who are currently suffering through the same trials my family had and even for those who are not. I need a publisher or an agent who believes in a project worth taking a chance on. I need an audience to hear the story I have strived to share through memoir.