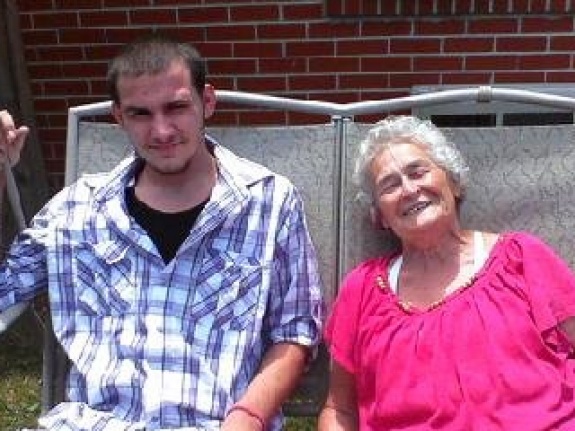 A bit about my mom. She was diagnosed with Alzheimer’s in 2009. We could see changes in her as early as 2006, but I guess we all just thought nothing was wrong and Alzheimer’s never enter our minds till about 2008 when things really started to get out of hand with her. She started calling me telling me the same story day after day, sometimes 3 of 4 times in one day. Then she started saying someone was taking things out of her house. I kept telling her no one was taking anything out. I had told my step dad to go to the Doctors with her and talk to them about what was going on.

They ran tests and kept telling us nothing was wrong. I went to Ohio, after trying to deal with her calls and his daily, to go to her Doctors and get answers. Still they said nothing is wrong. She is getting older, they said. So I started my own research on Alzheimer’s and found myself with more questions than answers. Then on August 26, 2009, a day I will not forget (my Birthday), I get this phone call telling me mom was in jail. She had taken a knife after my step dad. (She did not hurt him or anything.) But she was defending herself.  She felt he was harming her because he did not understand what was going on and the only way he knew to get thru to her was to yell and she had enough and broke.

Well, the next few days was working with lawyers and the court to get her here to Virginia. That was a good and bad thing I found out because the good part was she was tested here by 2 doctors and I was told she was mid stage. And the bad was trying to care for her and work. So my search for answers about this went on and I searched and read even more. The 36 hour day book was a great help. Not knowing the area or anything, my thought was daily: is she going to be there when the kids got home from school? So I started to arrange my schedule so someone was there. That was hard to do. Then she would have days that all she did was cry. I would try to comfort her and she did not want to be. But 10 minutes later I could sit beside her and hold her and tell her everything was going to be okay. She did not want to admit anything was going on with her.

My step dad would make the 6 hour trip almost every weekend to see her and that put a huge smile on her face. Then at Christmas he asked about her going back to Ohio. She wanted to go back also, so I told him he had to get her a hearing test done and I would pay for her hearing aids. Done, he said. So I allowed her to go back. She did well for a while. She made mistakes while he worked. He would call me each morning and tell me something she did. I told him to hang in there and reminded him that whatever he did, he could not yell at her. My phone rang one night and he said that she had gotten all their meds--yes both hers and his--and dumped out the bottles (he had them hid) on the table. He could not tell what was what or whose was whose. I could hear her in the back ground saying, “I really screwed up.” I told him to call CVS and tell them what happened and they would help. So he did and took the pills to them and they got everything corrected for him.

Around February 2010 she started saying there were people in the basement. She swore there were kids in the basement and coming in the house after he went to work taking things. She would call me and tell me those boys are after her things. I tried to tell her no one was down there. Then in May she started to wander from the house and dad was getting no sleep trying to keep up with her. He called me crying and I told him to take her to the ER if nothing else for him to get a good night’s sleep. He did and then the next day we were told she had to go to a nursing home. I was already getting Power of Attorney over her. SO then the looking for a nursing home for her began. That is where she is now. I got her into Carriage Inn in Cadiz Ohio.

I go up every time I can to see her. This was the hardest decision I had to make. I had promised her I would never put her in a nursing home and I would take care of her. Well, I had to break that promise. There are times when I go to visit that she has no idea who I am. I can look in her eyes and I know without a doubt she knows me. I can see the love she has for me. She might not know my name but that ok. If someone asked me years ago if I ever thought I would be dealing with Alzheimer’s, I would have said no because my mom was so strong and now she is so frail. I believe Alzheimer’s is harder on the family members because we see such strong people turn into someone else. I have 2 moms--the one she was and now the one she has become, someone that depends on me as I depended on her as a child.