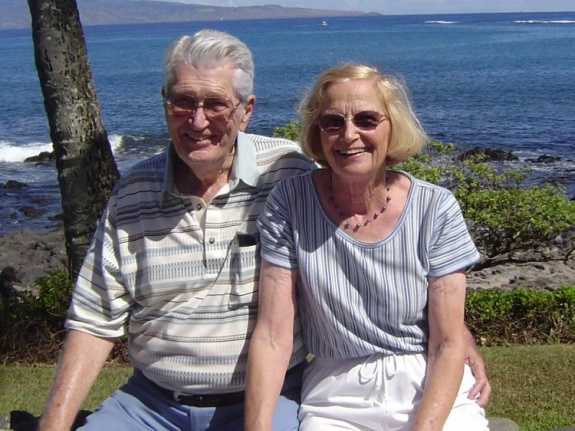 My journey of learning about Alzheimer’s disease began ten years ago when Mom started showing signs that something just wasn’t quite right.  I didn’t know anything about this disease. The early signs of Alzheimer’s or other forms of dementia start very slowly and gradually. It took me a long time to figure out what was happening to her. A new path for Mom was ahead of her and ahead of her family and friends.

When I was growing up, everyone loved my Mom. She was friendly, outgoing, easy to get along with, and she loved to laugh. There were times we all tried to figure out what was so funny because she was laughing so hard she couldn’t speak. She could make anyone feel good about themselves, even on a bad day. We were always close, and even in my sometimes annoying and moody teen years, we were friends.

Fast forward to February 13,  2005. Dad died very suddenly the day after his 80th birthday. Mom and Dad had enjoyed a wonderful day at the beach. They had gone to Ruby’s for lunch, and then had a walk around the back bay. Shortly after getting home, Dad had a heart attack and died several hours later. He was four days from retiring as a Los Angeles Superior Court judge.

We later realized that Dad was covering for her lapses in memory and not telling us that he was noticing issues. He had nailed a large key hook on a kitchen cabinet. We all thought it was odd that he was planning his retirement because we all knew he loved his job.

After Dad died, life went upside down for Mom and for us. At Dad’s funeral service, Mom was trying so hard to thank everyone for coming. People she knew for years and years would come up to her and she would say, “I know I should know your name.”

My husband, brothers and I would talk and we would ask each other if grieving could cause memory loss. Makes sense, doesn’t it? Certainly, that was it. She was grieving. It wasn’t grief. It wasn’t part of the grieving process. What was going on?   Something wasn’t right with Mom.

That was the beginning of our journey through Alzheimer’s disease. You may be noticing signs that something isn’t quite right with your loved one. I want other people who are concerned, to find out about Alzheimer's disease or other forms of dementia more quickly and easily than I did. There wasn't much information available in 2005. It’s better now, but there is still the stigma attached to having Alzheimer’s.

I started a website that contains my blogs, a lot of good information and some videos.  Please visit my website called,  “A New Path For Mom”  found at www.anewpathformom.com. Thank you.