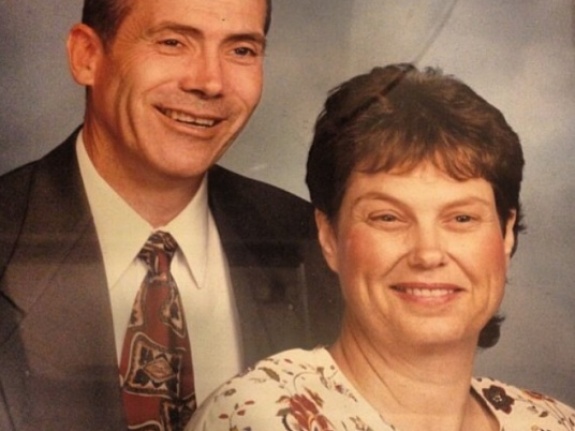 8 years after I was born, my grandmother was diagnosed with Alzheimer's.

My grandmother passed away peacefully on April 23, 2014. According to workers who were next to her, she sat in her favourite chair after eating breakfast, closed her eyes, and slumped over. When they couldn't revive her, they called an ambulance. She was taken to the hospital where my aunt was waiting for her to arrive. She was taken into a back room where they discovered she had suffered from a severe heart attack. My grandmother had signed a DNR years before so they couldn't do anything to try to save her. She passed away peacefully in a hospital room, and no longer had to suffer.

Pauline Ruth Copple DeNatly was a beautiful woman. She married Douglass DeNatly, and together they had 5 children. Shannon, Brent, Kelly, Jared, and Misty. Pauline's 5 children provided her with 6 granddaughters and 7 grandsons. Her  grandchildren adored her, and she spent years travelling between 4 of her children's homes visiting them. In the final years of her life, she moved from the home she had know for nearly 15 years to an assisted living facility in Salt Lake City. In those years, I watched the beautiful, bright, happy woman who helped teach me to read, who went to every violin recital, who took me to the library and ice cream, and who loved me unconditionally.....slip away, and I saw a hard, angry, scared person take over her body. I spent years being angry and scared of her. I pushed all the happy memories away because it was easier than reliving them. I used to pray every night that they would cure this disease so I could have my grandmother back.

Until the end I was still hoping and praying for a cure. I wanted my grandmother back. I saw all these other people with grandparents in their late 70's, 80's, and 90's and here I was with a grandmother in her early 70's, dying from a disease that made it so she didn't know who I was. I became very bitter because I saw a great injustice. I had lost a grandfather to leukaemia, a grandfather to emphazima, and now a grandmother to Alzheimer's. I had virtually no grandparents left. How did some people still have two sets of grandparents and I had none?

It has taken me years to share my story with anyone. I felt that by keeping it hidden, I wouldn't have to feel the pain, sadness, and loneliness. I still have a hole in my life that my beautiful grandmother left that I will never be able to fill. But by sharing my story and her story now, I hope I'll be able to help others in the same struggle I spent years going through.