Darla M. - The Evil Witch in the Mirror 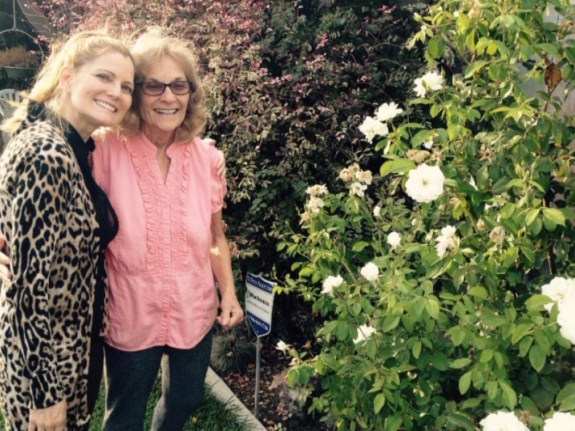 My beautiful mom was diagnosed with stage 6 Alzheimer's Disease less than a year ago at the age of 70. Yes, stage 6.  My dad refused to accept that anything bad was wrong with her. I finally forced her to see a doctor, who did tests and scans and then misdiagnosed her with 'stress.'  "Drink a glass of wine every night and exercise, then come back in a year and we'll re-asses," he said.  She really declined that year, but my dad was secure enough in the fact that the Doc said it wasn't Alzheimer's.  During that year she started seeing an evil witch looking back at her in the mirror.  This witch threatened harm to her and stole her belongings.  The first time I witnessed her yelling at this witch in the mirror, I couldn't get out of bed for 2 days.  I have never seen anything so horrifying happen to my mother before. She was absolutely terrified to be in her own bedroom at night.  I had to beg my dad to remove all of the mirrors from the house, which he finally agreed to a few weeks later. She still sees the witch in every reflection, even on a spoon.  She also sees other people that are not there, constantly.  She asks all time why these people are in her house.  She knows she is sick.  My dad won't tell her what's wrong with her. It is rare, but some Alzheimer's patients develope a Psychosis in conjunction with the disease, so my mom also received that added bonus.  I think that is the most torturous part of the disease for her. Losing the speech and the memory, abilty to use the bathroom, eat, dress, and do anything without direction is very bad, but nothing compares to the daily terror she experiences thinking there is an evil person in her home trying to hurt her.  And it's her own reflection.  My brother was a huge part of her caregiving last year, and even took a course on Savvy Caregiving for Alzheimer's.  My dad refused to have any part of it.  When all the caregivers are not on the same page, it makes it impossible to function and care properly for the person in need.  It also rips apart the family.  My brother couldn't take the way my dad handles our situation and so he moved out of state.  My dad refuses to get anyone to help out with my mom.  He insists on being her 24/7 caregiver. He is 72.  I live 35 miles away and go into town once or twice a week to help out. My mom lost her ability to speak about a year ago.  It started with using the wrong words, and then using a lot of gestures to explain things. Today she speaks in complete giberish although, she seems to know what she is saying.  She is reaching the point where she acts out and gets very angry.  I don't know how to get my dad to face the situation and allow someone to help him. He insists on doing everything himself.  This will eventually take it's toll. I feel alot of pressure because if anything happens to him, my life will turn upsidedown and I do not have the means to handle that situation and it terrifies me.  But more so, the fact that I will never be able to have a normal conversation with my mom ever again is the saddest thing.  My mom was 65 when she started showing sysmptoms, and I was the first to recognize them, but I could not get my brother or father to see what I saw.  That's what I am most angry about. My brother sees it now and it tears him apart knowing he didn't see it back then.  But as a husband, how do you let your wife reach Stage 6 Alzheimer's and not see that there is something very wrong?  This is what tore my dad and brother apart from each other. I am angry at my dad too, but I must continue to support both of my parents through this process.  I do not know if she will be able to attend my wedding 4 months from now.  My dad doesn't like taking her places anymore, because she acts out sometimes.  Already my story sounds awful and sad and full of misery and destruction, but I know there's so much more sadness to come.  Alzheimer's doesn't just affect the one person.  It affects the entire family. It can destroy an entire family if you do not stick together and work together as a team. I know there is help out there for her.  But when the primary caregiver says no, what do you do?  Deep in his heart, he feels like she will get better.