Lourieann W. - Our Many Firsts 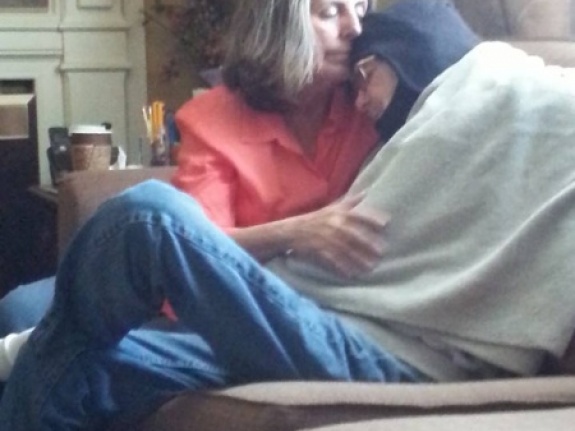 My husband, Phil, was 58 when he was diagnosed with Early Onset Alzheimer's.  He has a Master degree in Instruction; taught Math for 30 years.  Then, one day, he couldn't find his classroom; spent 16 weeks teaching a group of college students how to use a calculator, before anyone told us what was happening.  I was his caregiver for 8 years prior to his health deteriorating to the point we needed Hospice care.  With the Sundowners, I took early retirement from my teaching job, to spend the time he had left, at home with him.  I learned so much about Phil, from his younger years and from his time in the Viet Nam war.  Those are the memories he had left.  Phil forgot who I was on Oct. 13, 2013.  That day.....will forever remain another first; another sad moment.  I thought it was time to place him in a facility so we had to go through the Medicaid process which was more demeaning than helpful.  After following all the "rules" for eligibility (pretty much.....Phil no longer existed on paper, either), we found out he did not qualify.  Financially, devastating.  We had a lot of good times: laughing, singing, and teaching him how to dance.  My husband passed away, 16 days after he turned 66 years old.  He was diagnosed with Fronttemporal Lobe Dementia.  I have created a team, Wheatley's Hearts, and we participate in the Longest Day, June 21.  This disease.......is a mean disease.  Watching my husband lose the ability to even brush his teeth......we had 8 1/2 years of saying goodbye, each time another memory of our present, was forgotten.  Phil died on August 29th, 2014.  So, our many firsts, our new firsts through the disease process, continue for me as I celebrate our anniversary (15 years) on April 22, 2015.