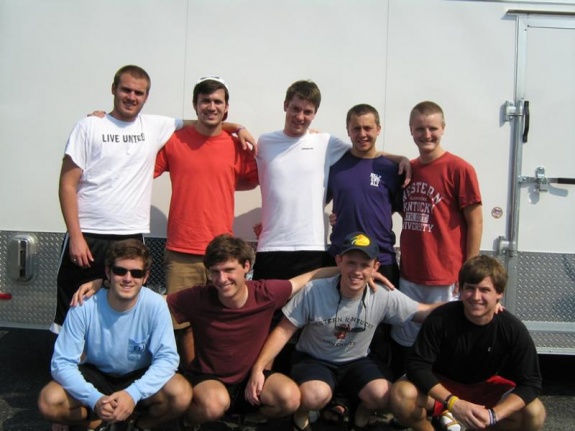 When I first came to college in fall of 2010, I wasn't passionate about anything. I was living on a day-to-day basis. Some friends influenced me to rush a fraternity and that's when everything changed. Upon entering the Phi Gamma Delta Fraternity house, also known as Fiji, I came across a picture frame. Inside the frame was a bike jersey along with two pictures: one taken by the Pacific Ocean in California, and the other at the Atlantic in Virginia. A member of the fraternity noticed my interest and began telling me the story.

It all began with Tyler Jury, a sophomore from Elizabethtown, KY. He wanted to do something that would change the world. When he lost his grandfather to Alzheimer's in 2009, he had something to direct his passion towards. He recruited 5 other fraternity members and together they formed Fijis Across America. Their goal? To end Alzheimer's. Beginning in Oceanside, CA, these 6 college students rode their bicycles 3,200 miles to Yorktown, VA, raising $56,000 for the Alzheimer's Association.

The story of Fijis Across America inspired me to make a change. I attended the Alzheimer's Advocacy Forum in Washington, D.C. in May of 2011. I had heard of the effects of Alzheimer's and how it destroyed families, but I had never listened to real people telling real stories in person. Needless to say, I was blown away. I was frustrated that the number of Alzheimer patients keeps increasing while the disease is still incurable. That's when I decided to help organize a second ride to combat this terrible disease.

When we returned to classes in the fall, I knew I wanted to repeat Fijis Across America. I had found my passion. My peers and I began discussing a possible repeat in fraternity meetings and before I knew it, I was planning Bike4Alz. Nine of us began coming together once a week to plan the new ride. We decided to go from north to south, sending us through 14 major cities, allowing us to set an ambitious goal of $175,000. As college students, we felt overwhelmed at times, but that's when we would read people's stories and how the disease had affected their lives and we would press on.

As we complete this two month journey from Canada to Key West, it's important for us to remember why we're riding. Bike4Alz isn't about bringing personal glory to each of us participating. It's about taking advantage of the time we have as college students over the summer to make a change. If we raise $20,000 or $200,000, success will only come in seeing an end to this disease.