Kate C. - A Man and His Truck: A Story in Memory of My Father 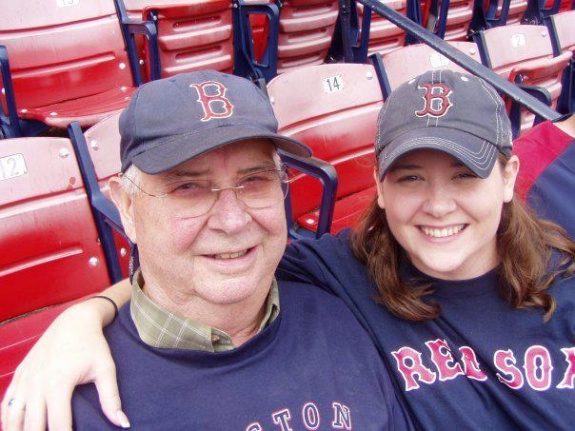 My Father lived a good life, which I know from the great stories he would tell, and the songs he would sing. My father had many friends, from all walks of life. He was a Pipefitter by profession, and was a member of the Union. He loved to work in his garage and always kept his hands busy. He was always working on a neighbor’s car, fixing a friend’s boiler or doing some type of job after he retired. He had this big red GMC truck that had one of those horns that went….AAAAWWWWOOOOGGGGAH. I remember riding in the truck when I was a kid, begging to press the button for the horn when we saw my neighborhood friends. My Dad loved cars, and loved working on them, especially his red GMC truck.

We never knew my Dad was dying. No one would tell us. Then he stopped chewing, and then forgot how to swallow, and then we knew. It’s hard to see someone who you always thought was the strongest man in the world, slowly disappearing. My Dad didn’t know who I was during the last month or so of his life. I moved into his house to help my sister Mary care for him. I had the night shift. We had a baby monitor in the caretaker bedroom so you could hear him if he was stirring. I would get up when he was restless so he wouldn’t feel lonely. He would just watch me. Even though he didn’t know who I was, he was never afraid of me, because he knew I took care of him.

Tonight he was different, quiet, and his breathing was a little shallower, but he was alert and happy when I walked into his room. The night was dark and still. My brother Michael, who came to spend the night to help out, and my sister, had long gone to bed. I could hear the soft tick-tock of the kitchen clock, and the swoosh of my socks, as I scuffed tiredly along the hard wood floor to his bed. He was fidgeting with his sheet and had it twisted between his hands. My father was used to working with his hands and when his Alzheimer’s got worse we would find him in the middle of the night, with his arms raised, and his hands in the air, busily working on an engine or a boiler in his dreams. This only proved to be a problem in the hospital when his hands would find the tubes or wires attached to his body. It would make for a busy night for us. Lucky for him, and for us, we had decided a month earlier that there would be no more hospital trips, no matter how bad he was. Tonight the lamp by his bedside flooded him with soft golden light. He looked peaceful. I asked him if it was ok if I sat with him for a little while and his bright little smile told me it was ok.

I dragged his rocker to be closer to him, the same rocker he used to rock me to sleep at night when I was a baby. I gently unwound his hands from the twisted sheet and took his hand in mine. His hand was cool to the touch, his skin pale and soft. I smiled gently and looked into his grey tired eyes. I asked him, “Do you know who I am?” He looked at me and replied, “No, I do not,” I explained to him with a quiet, slow voice, with my biggest smile, “I am your baby girl, Katie. You had eight children and I was the very last one.” He then said to me with an inquisitive smile, “Really?” I then continued, “Yes and you know what? You were a really great Dad and you gave me a very happy life. Thank you so much!” I watched as a smile stretched across his face. He asked, “I did?” I grabbed his hand tight and drew my face closer to his and said “Yes, you did.” His face soon softened and he looked more relaxed. A few moments later I watched as he was just about to doze. I heard him sigh, and then he said “I did.” I stood up to tuck him in, and as I kissed his forehead said, “Yes, you did, my love.”

Little did I know when I crawled back into my warm bed that our time with him was now limited to just hours. When I woke an hour later to check him, I realized he was out like a light, but that the bed needed to be changed. But for some reason, I couldn’t move him alone, he was so heavy. I had to call my sister to come over to help me. I hated to wake her. She had been spending the night with Dad alone up until just a few days ago. I knew she needed her rest. But I had to call her. When she arrived, out of breath from running, I saw fear in my sister’s eyes, and I am sure she saw it in mine too. We got him as comfortable as possible, as quickly as possible. At this point the sun was slowly starting to come up. I was always relieved to see the sun whenever I did overnight shifts with Dad. I guess it was the relief of having him one more day.

After Dad was comfortable and tucked in we made the necessary calls to family, as we each took turns sitting with him and holding his hand. My sister began to notice he was fidgeting and making a noise. She went to his side and began asking him “What’s going on buck? You ok kid?” he wouldn’t reply. He only made the same noise, and made the same gesture, with his hand under the blanket. My sister lifted the blanket to what he was doing, and then she figured it out. He was trying to start his truck. My father had not driven in years. So my sister said to him, “You trying to start the truck Dad?” My Dad nodded his head and kept making that noise, the noise of an engine that wouldn’t turn over. She then asked him, “Dad you sure you got the right key? You need your keys Dad?” My dad nodded his head.

My sister slipped quietly from the room and went into the kitchen to get my Dads keys. My Dad always carried keys even when he was no longer allowed to drive, just as a comfort to him. But over the past weeks my sister had to put the keys on the keyboard because we were having trouble with him putting objects in his mouth. She removed the keys from the keyboard and brought them into him. She slowly raised the sheets and took his hand and placed the keys in his hands. He continued to try and start the truck. He then spoke, he said, “Henry is waiting in the truck for me.” Henry was my Dads old friend that had passed some years ago. My sister and I looked at each other, everything went silent and I could just feel the thud-thud of my heart in my chest, tears built in my throat, my neck burned from holding them back. My sister then said, “Ok Dad, you got the keys now. You can go. Henry’s waiting.” We continued to encourage him and he continued to turn the key to get that truck going. Never did I wish harder for a truck not to start.

Eventually he tired, and fell into a comfortable sleep, his breaths slow and deep. We knew he was ready. We would not be getting him out of bed today. We would not be helping him dress. We would not get to fix him his favorite breakfast, his coffee just right. He would not be singing, we would not be laughing. Family began to arrive. Soon the house was full. My father died later that day in his room surrounded by family, with his keys in his hands. After all, if there was one thing my Dad was known for, it was getting trucks started, especially his red GMC truck.