Alzheimer’s is not a normal part of aging—it is a devastating disease.

For families, caregivers, and society at large, Alzheimer’s and related dementias can be emotionally and financially ruinous. Alzheimer’s disease and other dementias generate catastrophic healthcare, economic, and social impacts—and these impacts are rapidly growing.

Alzheimer’s disease is the most common form of dementia, a progressive brain disease that slowly destroys memories and thinking skills. Alzheimer’s often starts 5, 10, or even 20 years before symptoms appear. Symptoms usually start with difficulty remembering new information. In advanced stages, symptoms include confusion, mood and behavior changes, and inability to care for one’s self and perform basic life tasks. Alzheimer’s is ultimately fatal.

UsAgainstAlzheimer’s knows that this is unacceptable and is working to stop Alzheimer’s.

Alzheimer’s is the only top-10 cause of death in the United States with NO known cure.

Washington Post, New study ranks Alzheimer’s as third leading cause of death, after heart disease and cancer.1 It claimed more than 500,000 lives in 2010: more than 1,369 people a day.2

Approximately 5.7 million people in the U.S. currently have Alzheimer’s disease. The number of Americans with Alzheimer’s is projected to triple to 16 million by 2050.3

Someone in the United States develops Alzheimer’s every 65 seconds. By 2050 this is projected to be every 33 seconds.4

Alzheimer’s is not just a disease of old age: 200,000 people under age 65 have early-onset Alzheimer’s disease,5 and the disease affects the entire family.

In 2017, 16.1 million family caregivers in the United States provided an estimated 18.4 billion hours of unpaid care in for people with Alzheimer’s and other dementias.6 A new report from UsAgainstAlzheimer’s shows that the U.S. has vastly underestimated the public costs and consequences of the Alzheimer’s epidemic, and major social trends have direct and adverse implications for our capacity to cope with the Alzheimer’s epidemic in the years ahead.7

Alzheimer’s disease is the most feared disease in the U.S.8

Alzheimer’s disproportionately impacts women and communities of color. For more information on gender and race disparities, see our disparities page. 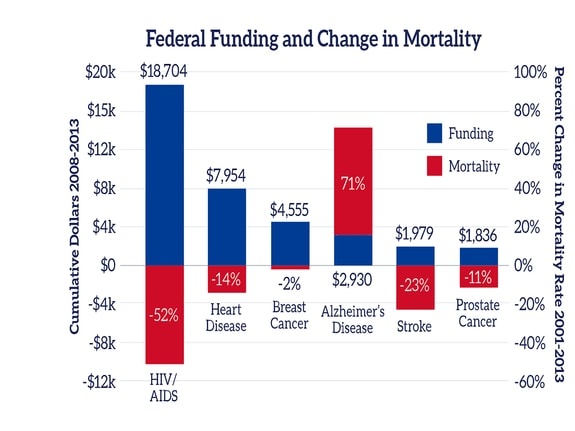 Alzheimer’s is the most expensive disease in the nation. The financial costs of Alzheimer’s for families and the government are enormous.

Total annual out-of-pocket payments in the U.S. for healthcare, long-term care, and hospice care for people with Alzheimer’s and other dementias is projected to total $259 billion in 2017 and increase to $1.1 trillion by 2050,9 if we don’t develop a treatment or cure.

Federal research funding is inadequate for the scope of the problem.

The research community believes it will be possible to prevent or control Alzheimer’s within the next 10 years with adequate research funding and other reforms to accelerate the drug pipeline.

Federal research funding is a fraction of that of other major diseases.

More than $250 billion is spent annually in out-of-pocket healthcare  for Alzheimer’s, which is more than 179 times the amount spent on finding a cure.

For every dollar the federal government spends today on the costs of Alzheimer’s care, it invests less than a penny in research to find a cure.

It is important that our government officials make fighting Alzheimer’s a national priority and dedicate adequate resources to research. Go to our action center for concrete ways that you can help.

Important clinical trials that focus on potential prevention and treatment for Alzheimer’s are under way. See our clinical trial page for more information.

Alzheimer’s is a global crisis that requires a global solution. It is a grave threat to the world’s health and finances if not stopped. Worldwide about 50 million people have some form of dementia, and someone in the world develops dementia every three seconds.12

When the world has faced catastrophic challenges before, nations have marshaled significant resources behind clear goals and objectives to achieve great things. For example, the world committed to ambitious, aggressive, and well-funded efforts to prevent and treat HIV/AIDS, tuberculosis, and malaria. Those efforts have paid significant dividends in lives saved and economic development fostered.

UsAgainstAlzheimer’s Chairman and Co-Founder George Vradenburg serves on the World Dementia Council to tackle this problem globally; find out more about their work here.

2 National Institute on Aging Number of Alzheimer's deaths found to be underreported.

8 Nick Eberstadt. Hiding in Plain Sight: Social and Demographic Trends That Will Exacerbate the Impact of Alzheimer’s.

Receive the latest news and updates on the Alzheimer’s Crisis.