The Changing Face of Alzheimer's

UsAgainstAlzheimer’s is a national leader in addressing disparities in the frequency and impact of Alzheimer’s among Latinos, African Americans, and women. Join us as we build a more inclusive Alzheimer’s movement. 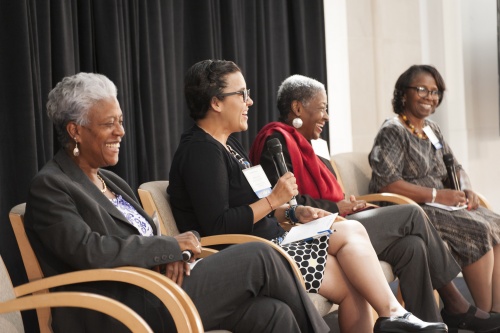 About Racial and Ethnic Disparities in Alzheimer’s 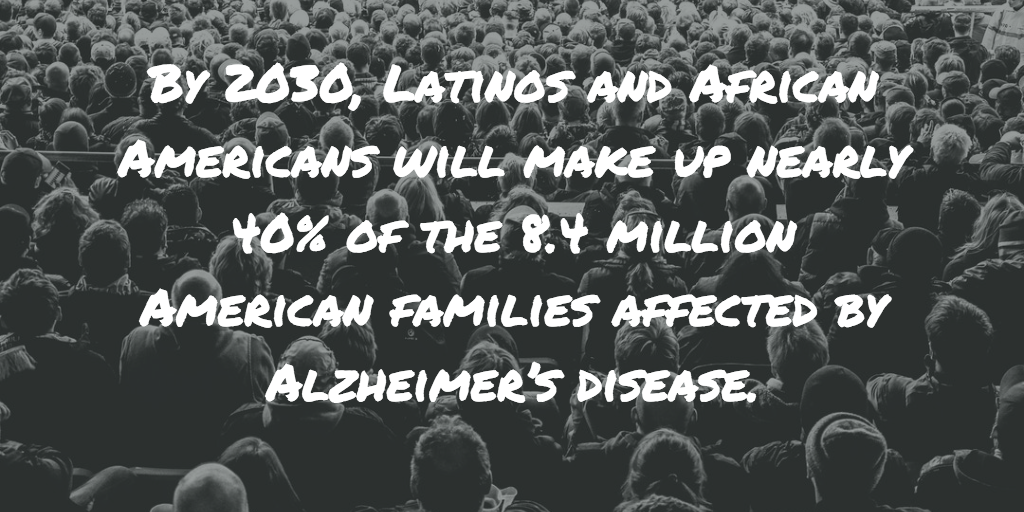 The Latino and African American populations age 65 and older will grow 224% and 114%, respectively, by 2030, compared to a 65% growth rate for non-Latino white Americans. This demographic trend foreshadows a tremendous growth of Alzheimer’s in communities of color. According to researchers, the number one risk factor for Alzheimer’s is advanced age, and the likelihood of developing the disease doubles about every five years after age 65; after age 85, the risk reaches nearly 50%.

Stigma, misunderstanding, and weak linkages to our nation’s healthcare system are leading to significant disparities in Alzheimer’s and dementia diagnosis rates, access to treatment, quality care, and clinical research and trial participation rates among Latinos and African Americans.

The Toll of Alzheimer’s on Communities of Color Is Growing

Death rates among communities of color due to Alzheimer’s disease are on the rise. 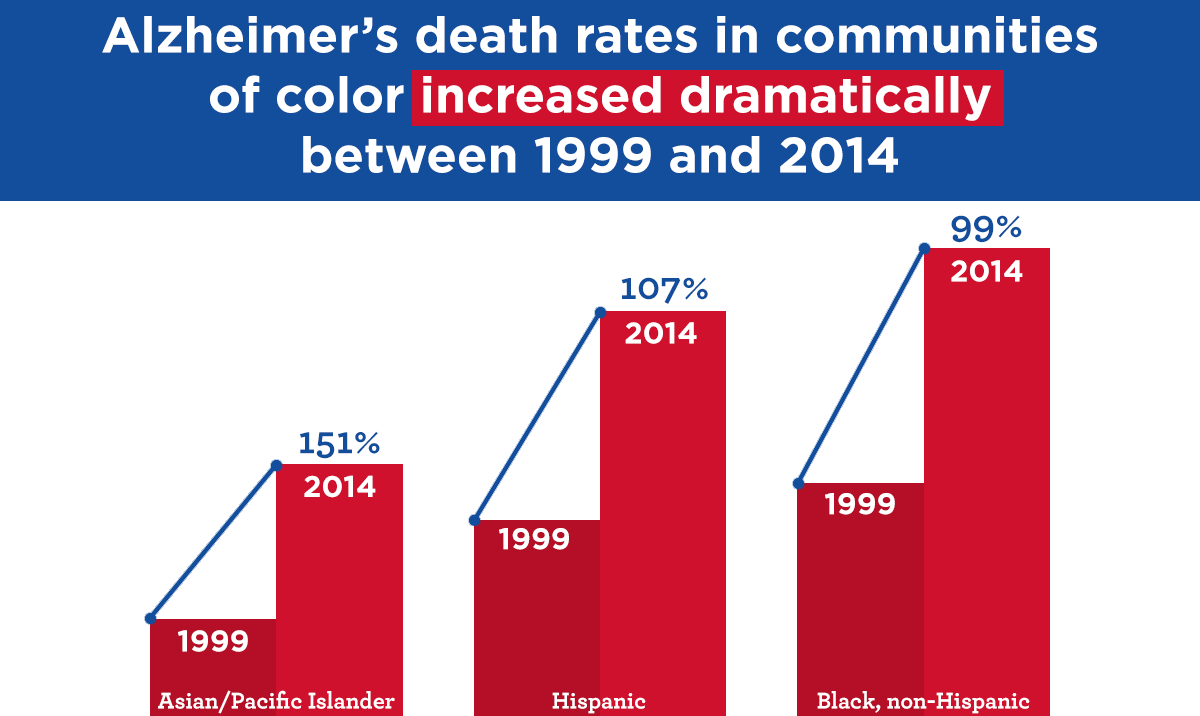 Communities of color are largely unprepared for the financial hardship of Alzheimer’s. Families can expect to spend between $41,000 and $56,000 annually in dementia-related costs, according to a RAND Corporation study. This is a frightening prospect for Latino and African Americans communities, where the median household income in 2010 was $40,785 and $39,715, respectively.

According to UsAgainstAlzheimer’s and the USC Roybal Institute on Aging, the total direct and indirect costs for Latinos living with Alzheimer’s will reach approximately $105.5 billion by 2060 (in 2012 dollars)—costing the U.S. economy a total of $2.35 trillion (in 2012 dollars) through 2060.

Imagine a world united by women against Alzheimer’s. That vision is at the heart of WomenAgainstAlzheimer’s, a disruptive coalition of women across the globe who are demanding solutions for this health and economic crisis. We are driving awareness and change for the greatest women’s health and rights imperative of our time: fighting Alzheimer’s disease.

Millions of American women are dying with Alzheimer’s, or sacrificing their health, finances, and careers to care for someone with the disease.

Women are twice as likely to suffer from Alzheimer’s.

Two-thirds of those dying with Alzheimer’s are women, and one in six women age 65 and older will develop the disease, which is twice the incidence rate of breast cancer. Yet, the disease is rarely defined as a sex- or gender-based public health crisis.

Women are twice as likely to care for someone with Alzheimer’s.

The consequences are devastating. Half of women caregivers alter or end the basic routines of their working lives, and 75% worry about caregiving’s toll on their health.

This immense burden on women will only grow heavier.

Women bear 80% of the social cost of Alzheimer’s—already estimated at over $200 billion in the U.S. alone. Imagine the impact as the global prevalence doubles every twenty years through 2050.

Those in power are ignoring this catastrophe.

Research funding is one-tenth of that for other diseases, support for affected families is rare, and public discourse overlooks the disproportionate burden on women.

Our Strategy for Addressing Disparities

UsAgainstAlzheimer’s has launched a multifaceted effort to address disparities in Alzheimer’s among communities of color and women through coalition building, tailored community outreach, policy advocacy, and community-centered research collaborations.

AfricanAmericansAgainstAlzheimer’s is spearheading a nationwide effort to address these issues and to ultimately increase participation in clinical trials to ensure that tomorrow’s treatments will be effective for everyone.  We do this by meeting African Americans where they are—in churches, community centers, and through leading civic and professional organizations—and providing information designed to raise awareness, reduce fear and apprehension, and build trust as essential first steps to research participation. As part of this effort, AfricanAmericansAgainstAlzheimer’s is raising awareness of the disease through local productions of the award-winning stage play Forget Me Not, directed by Garrett Davis.

As a member of the UsAgainstAlzheimer’s Network, WomenAgainstAlzheimer’s unites women across the globe to find a cure for Alzheimer’s. Our growing network of women is impatient with the slow progress being made in the Alzheimer’s fight. Driven by our passion, we are committed to ending current “business-as-usual” approaches to funding, research, and advocacy, bringing Alzheimer’s out of the shadows and into the spotlight. Women won’t wait.

The Annual Alzheimer’s Disparities Symposium is a cornerstone of the National Alzheimer’s Summit and provides a forum for knowledge sharing to address disparities in Alzheimer's. This signature gathering brings together more than 200 diverse researchers, patients, caregivers, and stakeholder groups to network, brainstorm, and develop partnerships around common goals. Outcomes of the symposium include the launch of the Alzheimer’s and Dementia Disparities Engagement Network in 2016. Read the 2016 symposium recap report here and watch the 2017 symposium here.

As a result of these coordinated efforts: 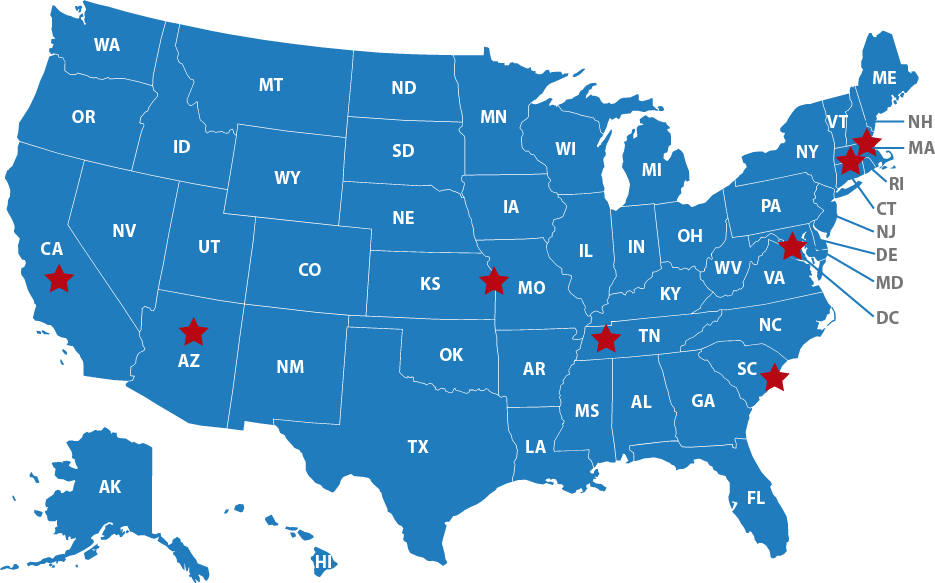 In the following publications, among others, UsAgainstAlzheimer's helped frame the urgent need to address Alzheimer’s disparities among communities of color and women:

Why women should worry about Alzheimer's

Daisy Duarte: Alzheimer’s stole my mom’s memories and mine are next 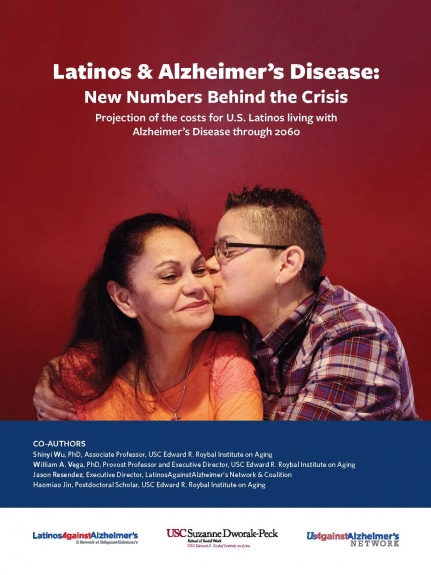 Developed with the USC Roybal Institute on Aging, "Latinos and Alzheimer’s: New Numbers behind the Crisis" is a first-of-its kind report on the economic impact of Alzheimer’s on Latino families and the American economy.

The Costs of Alzheimer’s and Other Dementia for African Americans 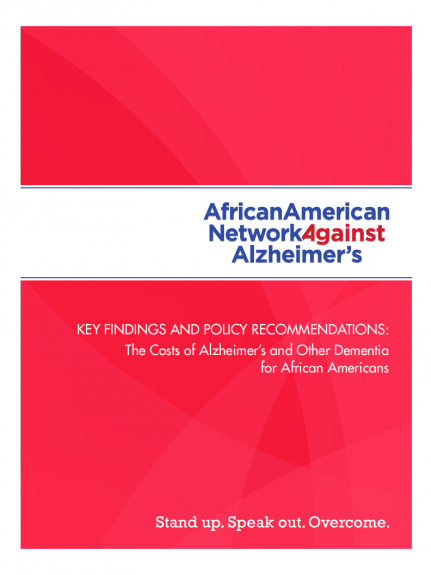