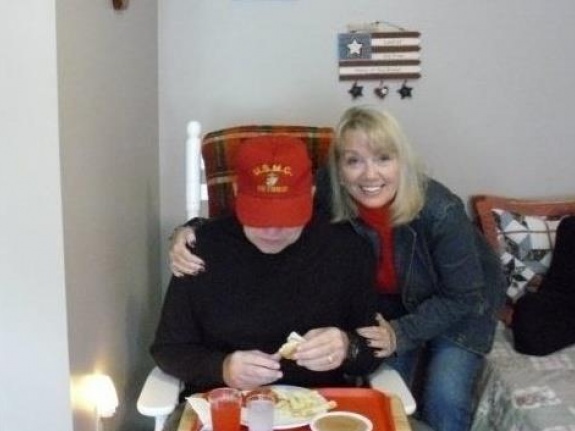 My name is Aaralyn Oakley-Wheeler, and lost my husband to the merciless disease of early onset Alzheimers/Picks Disease in December of 2009. Jim was a retired officer of the U.S. Marine Corp. A tall, straping handsome man. He was diagnosed in early March of 2006, upon finding out that he was having difficulty performing his job. He had retired for the Marines in 1995 and worked as an Infrastructure Analyst at DSCC (government facility). To say that my life stopped on a dime that day would be an understatement. I was devastated, and Jim was already so far progressed that his understanding of the prognosis was unclear to him.

In retrospect, I am thankful for that, as he continued to live as though nothing was wrong with him. However, he would have days where he was more aggressive or more depressed than usual. I had to stop working to attempt to care for him at home, which over time and with his progression became more and more difficult for me. I, sadly, had to admit him in Assisted Living in late 2007, but it was a beautiful (private-pay) facility, and only 5 minutes from our home. I promised him that I would never miss a day of visiting or taking him to all the places he had always enjoyed, and I kept that promise until the day he passed away.

This disease just doesn't impact the person diagnosed. I remember very well, crying for hours upon end, trying to figure out how we would live financially, and how I would continue to live with hope about a future that was not meant to be. I remember the daily grief I felt when looking in my husband's eyes and knowing that he no longer recognized me as his wife. I remember the happy times, as well. The days that I could make him laugh by just being silly.

He had become childlike, and that was such a learning process for me. I still find things hidden around the house that I had no idea where he had put them, as I had no idea he was experiencing the early symptoms of this disease. Jim's illness, albeit very heartbreaking, taught me many things. Probably the most important was patience, and kindness, and an everlasting, unconditional love. He was always more important than me, no matter what the situation. His happiness and quality of life became my sole purpose for the duration of his illness.

I didn't just lose Jim on December 14, 2009, I lost him on March 6, 2006. However, I still had his presence, his smile, his laughter, his companionship. I miss him every day, but I truly have some wonderful memories. I am still trying to recover from the emotional, physical, and financial impacts of this merciless disease. I know the hardest day for me was not the day the doctor gave me Jim's diagnosis and prognosis, but the day he no longer knew my name, or remembered our life. I remember our last dinner together at the Assisted Living facility, and he actually made eye contact with me, which he hadn't done in quite some time. He eyes revealed so much to me. He was tired, he was just tired. He could no longer hold his head up, talk, walk, or even eat without choking. Drinking even became difficult.

I left that evening praying that it was just a bad day, and tomorrow would be better. That was not to be. The next two days I didn't leave Jim's bedside, and he passed away at 8 a.m. on Monday, December 14th, 2009. He is now at peace, and a Marine in Heaven. Thank You for allowing me to share my story.