Faith D. - My Parents and I 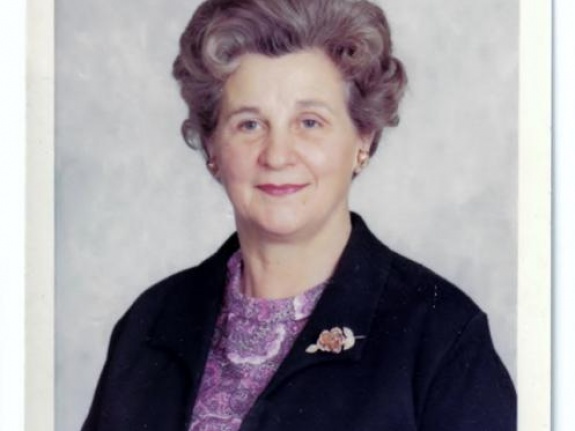 My mother was ravaged by Alzheimer's. Early symptoms of short-term memory loss and confusion were evident when she was almost 73 years old. Later, hallucinations and paranoia--trying to get Dad out of the house (late afternoons) because "My parents are coming home, you can't be here so get your car out of their driveway!" At times, she would suddenly turn vitriolic and spew out accusations to Dad, angry because he'd invited his family to visit them for a week--right after she'd lost a son in childbirth. "How could you do such a thing?"

Dad took the brunt of Mother's disease. Because I lived nearby, my husband, kids, and myself were witness to her deterioration and to Dad's feeling of helplessness and sadness. We were mourning the 'loss' of mother twenty years before she died. Besides helping Dad in handling Mom's daily routine, I pulled out all the early photos of Mom and her siblings and parents...and grandparents...going back to the 1860's. Mom would revel at them and would identify everyone...neighbors, second cousins, et al.--with enthusiasm and smiles.

But she was suffering from osteoporosis, terrible back degeneration, and deep depression, that Dad and I could clearly not deal with. Getting her in and out of her wheelchair was an ordeal for the three of us. She was in excruciating pain being moved around. Having Meals on Wheels was convenient, but Dad was emotionally torn by trying to deal with Mother's needs. He would call us at supper time, asking that I come into town and help him. This happened a lot. The kids grew resentful that our suppers were getting interrupted so frequently. I know, that is selfish. I began to resent it, myself. The tension and stress rubbed off on everyone in the family.

The worst day of my life was when Dad and I took Mom to the nursing home. I cannot describe her outrage as the attendants helped her into the wheelchair. "You tricked me, the both of you! You tricked me!"

For a while the nursing home had Mom attending rudimentary baking class and wheelchair arm exercises, and of course there were community 'sings' and such. But her eyes grew vacant, she was not 'there.' She did enjoy being wheeled outside where family members would gather for picnics. But she was quiet, and confused.

One day when I entered her room, she was reaching forward, trying to get out of her wheelchair restraint, calling to me "Help me! Help me! Mother is drowning, Junior and Donald are drowning. Help me! Help me!" Such terror! So real, to her! Burning houses, family members being swept away...The horror. Hell on earth. Insidious Alzheimer's!

I sooned learned that Dad's attempts at getting Mom to remember her children and events were futile. She was moving ever-so-far back...to her own childhood memories. Summers of helping her grandparents on the farm. She would talk fondly of "Jack and Jill," "Tom and Jerry--" the work horses and mule teams. Summers were a reprieve of sorts for her; she was the eldest of 6 and had many caretaking responsibilities therein.

It was important for Dad and me to spend time together. He wrote two books (I edited) that were published when he was 85 and 90 years old. It was good to see him enjoying the socialization that the residence home offered. (He could not live in the house he and Mom had shared, once Mom was commited.)

My visits with Mother included singing to her as I brushed her hair. She loved that, and my stroking her head. Just as she used to comfort me! Her response of "Mmmm...Mmmm" was heartwarming, as she had lapsed into silence over time. She could only faintly mumble or reach her arm out for help. Medications apparently placated her anxiety, or desguised it. She just lay there on her back because it was too painful for her to be turned.

In her years of being bedridden, she received excellent care from the nursing staff. I created a photo album titled "Some Moments in Mother's Life" and left it in her room. I wanted the staff, and visitors, to see what a vibrant, gracious and loving woman my mother had been.