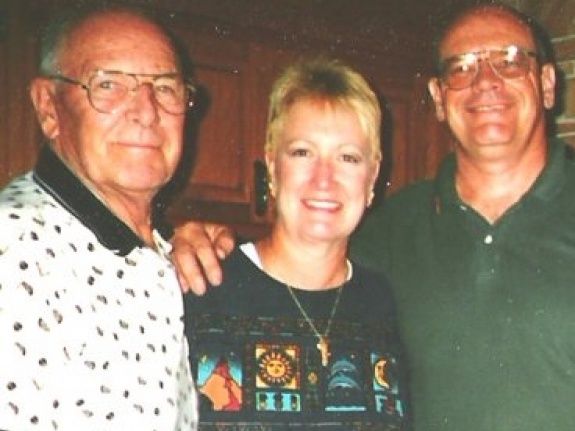 My beloved father, Maurice died in 2004 from what we were told was probably Alzheimer’s. (We were told that without a brain autopsy one can't be 100% sure.) My husband and I moved to South Carlolina in 1995 to be near my elderly parents to help my 5' 2" petite Mom care for my 6'2" tall Dad. My Dad was educated at Princeton and Tufts. He had been a successful executive, served his country in WWII in the Navy, and served his church & community for many, many years in leadership roles. He was diagnosed with lung cancer in 1996, and during the recuperation from the surgery (he never needed chemo or radiation thank God), we noticed that he wasn't quite himself. The doctors told us that it was a side effect of the anesthesia and would improve. It didn't. My Dad tried to continue his Real Estate career, but had to resign from the boards he served on, because he couldn't remember what they were discussing.

He finally retired from Real Estate when he got to writing a contract for a sale (something he had done, and taught for years!) and couldn't complete the paperwork without my Mom's help with the numbers. He remained sweet natured and loving right up until the end, but by 2000 he could no longer handle his finances (checkbook/ledger which he always kept using double entry since he had been an executive treasurer like a CFO). My Mom (with my help) took over paying their bills and making all their business decisions, a role she was totally unfamiliar with after 50 years of marriage. Years after he died, I was cleaning out his desk and ran across his ledger books. I could see before my eyes the deterioration of his mind in the ever more illegible, incomplete and error-ridden entries.

In 2003, I managed to save up and take my parents and my husband on a short cruise leaving from a nearby port. I worried how my Dad would handle it, since changes often caused a lot of anxiety, but he handled it amazingly well and had a wonderful time. It was a lot of work taking care of him on the cruise, but I am so glad that I did it because those were the last happy memories I have of my Dad. He wasn't himself, but he could still talk a bit, and smile and laugh.

That fall, he started having problems with controlling his body functions. Over Christmas he basically became completely silent and withdrawn. He was hospitalized in mid-December because they thought he might have had a stroke, but he never was able to come home. After a month in the hospital, where either my Mom or I had to be by his bed because he would wake up disoriented and scream or cry and try to get out of bed if he was alone. He no longer spoke to us other than to grunt or cry out, but he would sometimes smile or pat your hand like he knew you.

I spent Christmas Eve alone, curled in a chair beside my Dad's hospital bed, holding his hand in the dark, looking at the lights on the little fake tree we had put in his room to cheer him up and praying that the angels would come for him and take him home. I would stay nights, and my Mom stayed days. The doctor's I worked for were not compassionate at all about what I was going through. I was repeatedly told to just put him in a nursing home, that I couldn't work and care for my parents, I'd have to choose. But I was the sole breadwinner for my family—what choice did I have? I worked all day, and stayed at the hospital at night.

Finally, Dad was discharged to a nursing home. The nearest one able to take an Alzheimer’s patient was almost a 60 minutes drive for my Mom (who has macular degeneration and can't drive at night). She would go during the day to be with him, and I kept up visiting him at night. In February, the nursing home closer to us had an opening and he was moved to somewhere that was only a 15 minute drive for my Mom. We continued to visit him daily. We tried very hard to take care of my Mom too, because she exhausted and devastated by the loss of her partner of almost 60 years!

Dad became progressively more and more withdrawn and non-communicative, he no longer recognized us or spoke our names, didn't ask for or reciprocate hugs or kisses and barely managed to eat. On Good Friday, I had a day off from work and went down to see my Dad with my Mom. The day was beautiful and I took Dad outside in wheelchair to sit in the garden. As we sat there looking at the fishpond, my Mom was telling me about something and I happened to look up at my Dad's face. He always had the most beautiful green eyes. We used to play look in my eyes and tell me what I'm thinking when I was a kid. As I reflexively smiled at him, I suddenly realized that he was actually LOOKING at me, really looking at ME. And actually SEEING me. For the first time in many, many months, maybe years, I saw my Dad in his eyes. Really saw HIM, in there, his soul, his spirit, whatever you might call it. I just sat there looking at him, smiling at him, holding and squeezing his hand. I said to him "I love you Daddy," and he squeezed my hand back. He hadn't been able to do that in months. We just sat like that until my Mom got up to wheel him back in.

Two days later, on Easter Sunday, 2004, my Dad passed away peacefully. My Mom and my niece were with him, I was at work. I never saw him alive again after that Friday. The greatest sorrow to me about Alzheimer’s is that it robs the person of who they are, and all the memories and talents, and joys that make them unique. Their bodies live on, but their mind and their spirits are long gone away and the grieving family is left day after day, mourning the person who is gone, and caring for the shell that remains.

Somehow that shell, which looks so much like the beloved, but has none of the essence of the beloved, makes the grief go on forever, at the same time as you the caregiver are grieving, the work of caretaking must continue. Truly, the victims of Alzheimer’s are not just the patient, but the family and loved ones as well.