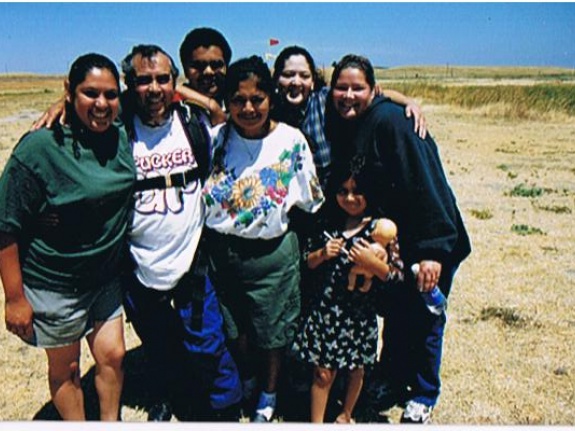 My father, Edwin L. was born in Puerto Rico in 1947. He grew up in New York...in Spanish Harlem. He was drafted to Vietnam where he served one tour and got two field promotions to leave the United States Marine Corps as a Corporal. In 1974, he married my mother and for the next 30 years, lived happily raising three kids as a sheet metal worker before becoming a correctional officer having graduated the Richard A. McGee Correctional Training Center in the first graduating class of 1995. and worked as a proud correctional officer for nine years before "little things" started to happen more and more frequently...

Finally, after walking out of the bathroom from taking a shower, his hair still wet and water dropplets sliding down his face, he turned to me and asked if he had taken a shower yet. for the next few days the incident played over and over in my head and after taking him to a doctors appointment on January 4th, 2004 at 9:30 in the morning, I spoke with his doctor about the incident. The doctor ran through the memory assesement..."List 3 items", "What city are we in?", "What year is it?", Repeat the list you made at the beginning of this assesement."

He had taken the assesement almost a year before that, but this time he had scored 2 points lower which caused the doctor to suspect the same thing we did.He was immediately removed from duty and placed on disability while he underwhent additional testing, a few MRI's and Cognitive funtion assesemements later, the diagnosis was confirmed. When we had it confirmed, I knew my world would never be the same again, nothing could have prepared me for the next five years and 10 months. By the end of 2007, he couldn't hardly shower himself, a few months later he couldn't hardly feed himself anymore. By Easter 2008, he couldn't even make it to the bathroom anymore. Shortly after this, my sister had moved home to be closer to us but she couldn't deal with the situation without help.

He started getting violent...he attacked both my mother and I physically. I'd walk around sometimes for weeks, with my stomach bruised where he had faught me. I'd have to restrain him on the couch, sometimes for several hours. Until April 1st, 2009 when he attacked me as I was walking out the door and my sister pulled into the driveway. I fell to the portch as he came towards me again as I laid there stunned for a few seconds, my sister ran across the yard and distracted him while I got up. I regained my bearings and took over as he had tried to swing at her. For the next two hours, I restrained him hoping that he'd calm down but it never happened. We eventually had to call 911 to have him taken to the hospital. He stayed in a facility for the next few weeks while he was put on medication to try and help him. But a few weeks later, he suffered a stroke and spent the next three months in a convalecent facility until his insurance coverage ran out.

My other sister brought our parents to live with her family, this proved slightly better...I was no longer the target for his aggression. I didn't have to suffer the physical attacks, he wasn't as capable or lashing out like that as often. To say I felt relieved would be an understatement. My first thoughts when they confirmed the stroke was "Thank god...it might be easier now if he's stuck in a wheel chair." I dreaded visiting him in the homes, he was and always will be the measure of what a man should be to me. He truly was Super Man in my eyes. From August of 2009 until he passed on October 9th, 2009 just before 6:00 AM I awoke after sleeping on the floor of his bedroom to discover he had stopped breathing...he had passed quietly in the night.