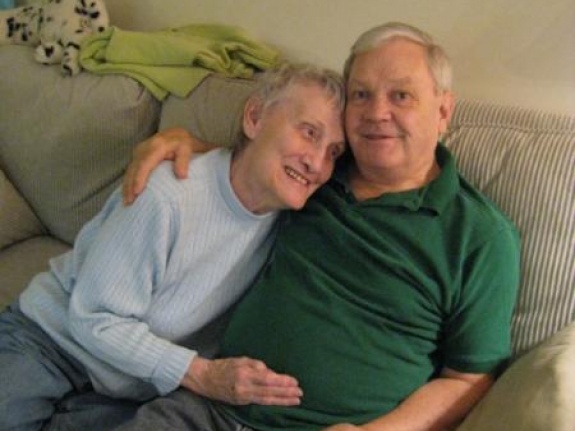 Dad's version goes like this: "Well, Mark twisted my arm to go with some friends to this dinner theater in Cleveland. Guess they needed another guy to make the numbers work. Your mom was one of the gals. We kind of liked each other and we started dating. Pretty soon we got married."

Mom's version is so much lovelier. That morning her friend Irene called to say a few friends were going to a show at Cleveland's Karamu House, the first integrated theatre in the country. Irene asked if Mom would come along. Mom said, "Well, sure."

Mom was the last of the five to be picked up and chance put her in the seat next to Dad. They couldn't take their eyes off of one another through the entire drive. At dinner, they again sat next to one another. Somehow their feet, and their knees, and their elbows, and their smiles kept bumping into one another. She never remembered what show they'd seen that night. When the group dropped Mom at home, Dad hopped out and walked her to the door. He asked if he could take her to mass the nexr morning.Mom said, "Well, sure."

They saw each other every single day from that cold January night until they were married six months later, August 3, 1957. I imagine that when the priest asked, "Do you take Richard as your lawful husband, to have and to hold..." Mom answered, "Well, sure."

Mom and Dad's was a traditional Catholic wedding ceremony and Mass. They had a big reception over at the Willow Room. They had a sit-down dinner and a dance band. Mom wore a gown of imported antique silk dupioni, featured on the cover of the 1957 Bride's Magazine just two months before. Over the years I've teasingly asked her how she managed to put together that fancy wedding so quickly. Mom just smiled. She knew when she'd found her man.

After Mom lost our names to Alzheimer's she callled her husband of more than fifty years "Dad." It didn't strike us as odd. She'd always called him "Dad" when she talked to us kids about him: "Dad says we have to leave by six." Through the years, he'd also been "her man." "My man can do anything! Just look at these beautiful raised flower beds, these new pantry shelves."

There came a time not too long ago, when Mom began to consistently refer to Dad as "my man." None of us thought much about it. Mom would appear in the kitchen as I made dinner and ask, "Is he here? My man?" "Oh, Dad's out on the porch," I'd answer. Often she'd sit down to wait for him. Other times, when my words no longer had meaning for her, Mom's wide eyes gave her away. I'd walk her to the door or window so she could see him.

In an article about the loss of language in Alzheimer's patients, I read that nouns and pronouns are the first to go. Such a mysterious and powerful and horrible process. My mom's brain separated the parts of language and took one or another away from her in an identifiable but incomprehensible order. Long before I read that article, though, we'd all realized her nouns were gone.

We knew when we started having to play the guess-the object-game. Pointing at the sky, Mom would say, "Oh, look at those big, beautiful, white, puffy, er, things up there."We'd look up. "Yes, in the blue!" she'd say, a little impatiently. One of us asked, "Do you mean the clouds?" "Yes!" she'd say happily, "clouds." During that period, Mom drew from her brain thousands of adjectives and adverbs, often surprising us by how perfectly they described the object she could no longer name.

The three of us have grown comfortable with her ever-changing cognition. It came as quite a shock when we realized that "my man" was just that:the man who provided cared for Mom. We'd not recognized the transition in which Dad lost his status as Richard-my-husband, and Dad-father-of-my-children and My-Man-that-fellow-I-love-with-all-my-heart. "My man" had become Jeeves. Indeed, my Dad had become the quintessential butler.

Months later Dad found Mom quietly crying in their bedroom. It took him hours for to tease from her the source of her sadness. Interspersed with "I'm so sorry," Mom conveyed to him that she knew he was her husband. And that she knew she had forgotten him. She lived in her sadness for days. The unstoppable march of Alzheimer's had managed quite a feat: it took away something precious to my family and then forcibly reminded us of the empty space it had created. It momentarily filled that space with her stolen memory.

The meaning of the name "Karamu,"the theater where Mom and Dad first met, is Swahili for "a place of joyful gathering." From a beginning as sweet as theirs and through the ups and downs that fifty years of marriage represent, my parent's relationship has evolved into an abiding love. My friend Cat says of her large extended family, "While we are not a perfect family, we are a perfectly good example of a family." So it is with my own: a perfectly good example of a joyful gathering and, ultimately, abiding love.