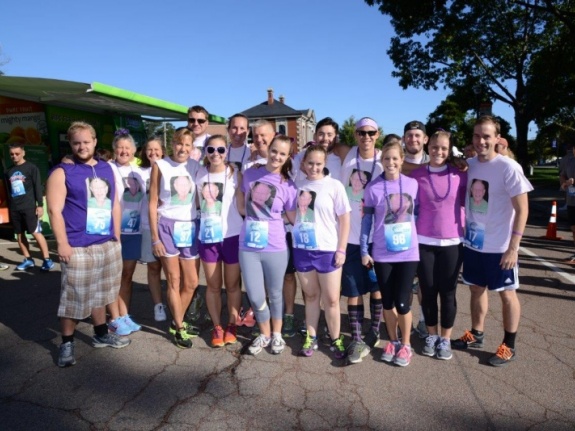 My mother, Genevieve LaBier had Alzheimer's disease from her early 70's until she died in 2002. In 2005 so many people would tell me that they had a loved one with Alzheimer's that I decided I had to do something.  Being a runner and owning our own business I thought this would be relatively easy to start a 5K road race in memory of my mom. My first call was to the local chapter of the Alzheimer's Association in Watertown, MA. I told them what I wanted to do and they sent me a race director’s packet. Somehow I managed to get everything in place being a committee of one. One thing I couldn’t do was the graphics, creating a logo, setting up forms and thank you cards etcetera. That’s where my talented husband, Peter, came in. Being a professional photographer and a photoshop guy he helped me create what was needed. Next came raising money. I called on any business that had done business with us and then I went to other businesses and introduced myself and told them what I was doing. Ninety nine percent were very receptive and generous. I thought I could raise a few thousand dollars and that would be my once in a lifetime accomplishment. When the race was over and I realized I had raised over $14,000 how could I not keep it a yearly event? 2014 was the tenth anniversary and the cumulative total to date is $214,000. Thank you to all that have supported this event and to it’s continued success.
Linda LaBier Silowan
Race director and Founder
Forget Me Not Road Race
In Memory of Genevieve M. LaBier
Tags: Sons and Daughters Activists
×