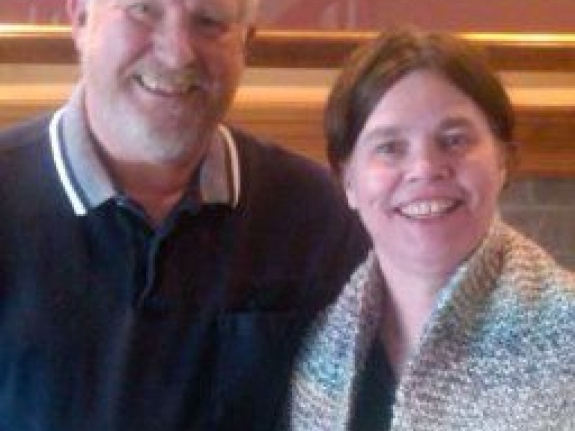 Sharon and I saw the musical ”1776” on Broadway during our honeymoon in 1971. A John Adams line from that play sticks with me even today. As he spoke about his frustration with his inability to convince the Continental Congress of the necessity of American independence, he spoke the words, “Is anybody there? Does anybody care?” It’s likely that in your political career, this sentiment and perhaps those very words have come to your mind. So I imagine you have some empathy when I say that those words come to my mind whenever I think of where we are as a country and particularly where this nation’s leaders are when it comes to fighting Alzheimer’s.

I hope that you are not as ignorant of the disease as I was in 2005 when my wife Sharon was diagnosed with Alzheimer’s at the age of 54. My wife was an RN and worked with the elderly as a member of Eastern Nebraska Office on Aging. Before her diagnosis, I knew that Alzheimer’s was a disease that struck people in their “Golden Years,” making “Senior Moments” much more frequent than what would otherwise be normal, accelerating the mental decline that was part of the normal aging process and sometimes causing an earlier death. That’s the view of many Americans today. Ignorant because what they know of Alzheimer’s is no more than the punch line of a “Senior Moment” joke. Alzheimer’s is such a thief - of plans, of dreams, of lives. Sharon often says “I NEVER thought” and can’t complete the sentence. But I know that Alzheimer’s, even the possibility of Alzheimer’s, never was a part of our plans until it entered and took over our lives, devouring our dreams.

Since Sharon’s diagnosis in 2005, we have traveled as much as possible. Last fall, Sharon and I drove to Colorado Springs to visit our daughter, her husband and three of our grandchildren. A few hours from our destination, Sharon said “I want to go home.” We ended up staying there only two nights - one full day - and likely it was our final trip. The unfamiliar can be uncomfortable. And, I’ve learned, even the familiar (the house we’ve lived in since 1983) can become unfamiliar. Several times in the past few months, Sharon has looked up at me with a pleading look and repeated the words “I want to go home.” We weren’t in New England or Florida or Missouri or even on the road to Colorado Springs. Each time we HAVE been in our home. In Sharon’s Alzheimer’s World, home can be that mirage on the horizon. “Home” is that life before Alzheimer’s entered the room turning everything upside down, hiding the familiar and robbing her of her most precious possessions - her memories.

Someone in an NETV show about dementia said it so well. Something like, “The tough day today will seem like a piece of cake two years from now.” That’s the scary part. We caregivers live with that. That’s what woke me up this morning at three. I am the mirror image of the single parent of a two or three year old. Similar communication problems, toileting problems, “babysitting” problems. There is one BIG difference, however, and I guess it can be summed up in two words: the future. The single parent can look back at the progress achieved as their charge got older, looking forward with anticipation to ”the future.” Someone in my position can see the regression of their loved one over the past few years knowing that, as hard as today may have been, it was “the future’s” really good day. That’s the view from the trenches. That is the caregiver’s reality.

Another reality is that it can seem as though there is no intelligent life in Washington. It sometimes seems as though it is too much to expect that the same mindset that has for so long been ignoring the coming disaster in Social Security and Medicare, would notice the “minor” Alzheimer’s crisis that is even now washing ashore, growing in strength every day. Alzheimer's is the sixth-leading cause of death in the United States and the ONLY one among the top 10 without a way to cure, prevent or even slow its progression. “Is anybody there? Does anybody care?” You HAVE to see the bar graph comparing how much is spent on research for the top six causes of death in the US. The one that barely shows up is Alzheimer’s. Then look at the “increases in deaths” of the “top six.” Easy to see Alzheimer’s on THAT chart!!! While the others have decreased, Alzheimer’s has INCREASED 66%. The “prim and proper” Alzheimer’s Association won’t ask you to realign the funds spent on research at the National Institutes of Health (NIH). I, on the other hand, have no problem telling you that that is exactly what needs to be done!

These are times when our priorities need to be looked at closely. The threat from Alzheimer’s to our entire medical establishment is very real and the amount spent on its research should be measured in billions of dollars not just millions. The proposal of the Obama Administration to add less than 100 million dollars in Alzheimer’s research is a joke and a joke that I find just as funny as a “Senior Moment” joke. The NIH should be directed to spend a portion of its Alzheimer’s research funds on areas such as coconut oil. This is an example of a possible treatment that is overlooked by Pharmaceutical companies simply because it’s not economically advantageous to them. Even if it turned out to be the very best Alzheimer’s treatment, it likely could not be patented and therefore would not be profitable. The same economic factors would not be true for the NIH and our government. A good yet inexpensive Alzheimer’s treatment could ultimately save the Federal government Billions!! Perhaps the goal I set is too low but at this point. While a cure would be nothing short of a miracle, finding a TREATMENT would be a miracle too! Personally, while a gourmet meal would be wonderful, just a crust of bread today would seem like a full meal. We are desperate. We need help. We need hope. We have neither. Sharon and I are counting on you to stand up for those who, like us, are affected so very deeply and profoundly by Alzheimer’s disease. We are asking not just for your help. We are asking for and WE NEED your leadership.