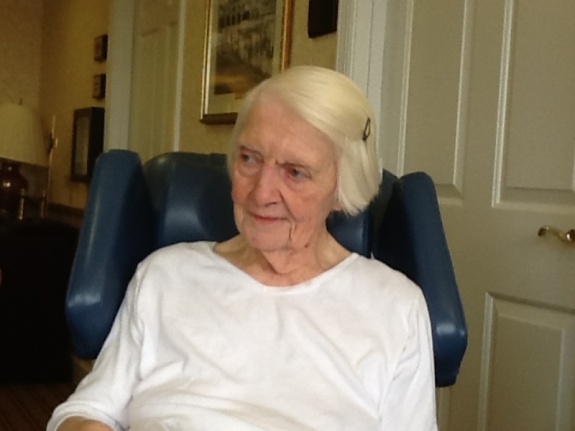 Our experience with Alzheimer's began in the late 1990's when my father began to relate to us on occasional weekend visits to their home (or their visits to our home) that "your mother's memory is getting so bad." His reports became more persistent and more detailed and included things such as her trips to the grocery were turning into absence from home for hours and her usual wonderful cooking skills were turning into the same meal several times per week. My father suffered from marked cardiovacular disease and had progressively lost his vision so it was initally easy to dismiss his concerns as exaggerated or related to stress my mother may be experiencing from caregiving for him. However things continued to evolve and several incidents caused us to no longer be able to ignore there was indeed a real problem.

Naively we believed if mom and dad lived closer to us and we could pop in to check on them more frequently things would be fine. So in 1999 after 6 months of discussion and planning my parents moved from their hometown of more than 50 years and into a senior commity "garden home" which was only a few miles from where we lived. Four days after the moving van unloaded and we were still unpacking boxes and finding places for all their belongings my father had a stroke that hospitalized him. He spent the next year rotating between the hospital, a rehab hospital, a transitional care hospital unit, nursing care and brief stays at the garden home with some home care services before his life ended 12 hours after being admitted to a hospice unit.

During that year it became apparent to us my mother's illness was much worse than we could have imagined. She made banking errors, got lost driving, made evening and night time phone calls looking for my dad, her deceased parents, her deceased sister, her "people" she could not name. She alternated between being profoundly grateful to have our help to hating me and accusing me of stealing her money, forcing her to live in a horrible, dirty, dingy, awful place (her description which did not sync with the real place). She convinced her lawyer, her investment counselor, and the staff of the senior community we were "the enemy" and called the sheriff when we "stole" her car.

The next 2 years we limped along with nearly daily visits to supervise and assist with her needs and knew in our hearts we were surviving on the edge but she adamently refused any alternatives. Finally we literally moved her without her knowing what was happening into an Assisted Living. I took her on a shopping trip out of town, and kept her overnight while my brother and nephew packed her belongings and moved her things into an Assisted Living. Again we naively believed everything would get better from that point on but instead we began another 8 years of moving into 4 dementia care facilities and 2 stays in a geriatric psychiatric care hospital.

We were involved with Adult Protective Services when she verbally threatened to kill another dementia patient while holding a butter knife; got to know the State Omsbudsman when one facility told us they no longer could provide the care she needed and had countless meetings with facility administors and demenita caregivers. Our options for care narrowed as her "history" expanded and more than one admission director told us with a smile, "We don't think this is the right place for your mother." Our list of must-haves for a care facility began to get smaller and things like convenient location and how new and pretty the building was completely fell off the grid. When her last "home" agreed to accept her we were like parents of a college student being admitted to an Ivy League school and nearly wept with relief.

Through the journey of 13 years from the time my parents moved to our city until my mother's death, unspeakable things happened to my mother and she was reduced from an active, loving, talented person to one who no longer spoke intelligable language, and depended on others for every aspect of her daily being. I was amazed at the capacity of some of her caregivers to not only physically care for her (including the dreaded 2 person shower which was like bathing a feral cat), but to love her and find positive things they shared with me everytime I came to spend time with her.

As for myself, I survived but in a different personna than before the journey. Some ways better, some not. Now 60 years old, I spend many moments wondering if my lost keys, word I can't articulate, and meal I botch are the first sign of my own dementia. My marriage is slowly recovering from years of neglect. On the upside I have a stronger long distance relationship with my only sibling (we have spent a record number of hours on long distance calls), met people I never would have known and now are among my friends, and have a strong empathy and resource base for people with dementia and their families who I meet in my Internal Medicine Nurse Practitioner role. We all have things, events and people that define our life and usually they are not chosen by us. I therefore believe Alzheimer's caregiving was chosen for me but still refuse to accept it with grace or thanksgiving and believe I could have lived without the journey. When I find the return department I will state when asked the reason for returning the gift "because I hate it."