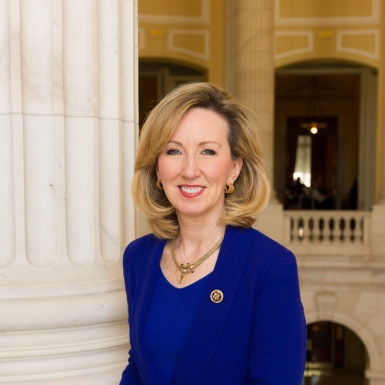 Barbara Comstock was re-elected to her second term in November of 2016 to represent Virginia’s 10th Congressional District (Loudoun County, Clarke County, Frederick County, and parts of Fairfax County and Prince William County as well as the Cities of Winchester, Manassas Park, and Manassas City). This was Barbara’s sixth electoral victory in eight years including her years serving in the Virginia House of Delegates.

Barbara was appointed to serve on the Governor's Economic Development and Job Creation Commission and, was also appointed by Virginia’s House of Delegates Speaker to serve on the Northern Virginia Transportation Commission. In the summer of 2010, Barbara was selected as one of 50 state legislators to participate in the "Emerging Political Leaders" program sponsored by the State Legislative Leaders Foundation and the Darden School of Business at the University of Virginia.

Congresswoman Comstock is a 30+ year resident of McLean, Virginia. She and her husband, Chip, a retired Fairfax County Schools Assistant Principal who continues to teach, raised their three children in McLean.