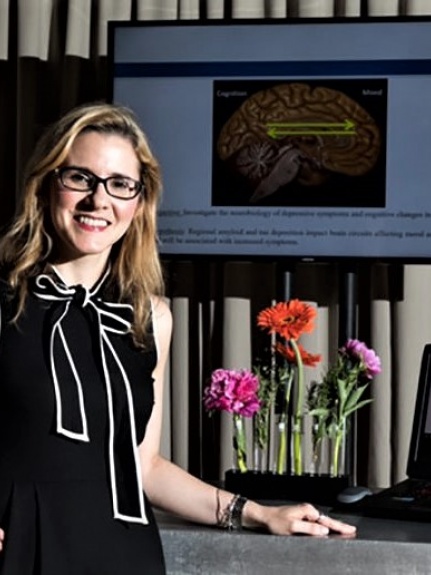 Is depression or anxiety a risk factor for Alzheimer’s disease – or the other way around? For our May 2018 Talk, we spoke with Jennifer R. Gatchel, MD, PhD, a geriatric psychiatrist at Massachusetts General Hospital and an instructor in psychiatry at Harvard Medical School.

Dr. Gatchel shared an overview of what we know, current theories on this topic, and insights from her own research, which has found links between depression and anxiety symptoms and buildup in the brain of tau and amyloid. Through a mix of brain imaging, cognitive testing, clinical assessments, and ongoing interactions with patients, her research aims to improve care and brain health for older adults.

CLICK THE PLAY BUTTON AT LEFT TO HEAR THE FULL DISCUSSION.

However, she says, we do not know definitively whether the opposite is true—if Alzheimer’s Disease pathology influences the development of depressive symptoms.

Can antidepressants help reduce Alzheimer’s risk? Any interventions that can lessen symptoms of depression and anxiety may promote brain health, which could protect against Alzheimer’s, but current evidence related to antidepressant medications is somewhat conflicting.

A study published in 2018 in the British Medical Journal found that antidepressants may be linked to dementia; however, while it found a connection, it did not address causality. Another study, also published in 2018, as part of the large Alzheimer’s Disease Neuroimaging Initiative (ADNI), found that those with mild cognitive impairment (MCI) who were prescribed a specific category of antidepressants over the long term, compared to those with short term use of these medicines or those with no history of depression, had a lower risk over time of MCI becoming Alzheimer’s—suggesting a possible protective role for these medicines.

Are some depression symptoms more concerning than others? Preliminary data from research under way suggests that certain aspects of depression and anxious depression may be more closely related to imaging biomarkers that indicate Alzheimer’s Disease. However, we do not yet have data over time on this question. A secondary aim of Dr. Gatchel’s current NIH-funded study is to learn whether certain constellations of depressive symptoms may also mark presymptomatic Alzheimer’s.

Is there anything I can do? For older adults with changes in mood or anxiety—either noticed by them or their family and friends—Dr. Gatchel advises they discuss their primary care physician, psychiatrist or geriatric medicine specialist about their symptoms and whether they might be at higher risk for Alzheimer’s as a result.  She also advises that patients work with these physicians to treat symptoms of depression and anxiety and promote mental and physical health.

“The relationship between Alzheimer’s and depression is quite complex,” says Dr. Gatchel. She sees better understanding of this area as a crucial unmet need for many patients and families.