On March 25, 1966 at a press conference before a speech at the second convention of the Medical Committee for Human Rights (MCHR) in Chicago, Martin Luther King said, “Of all the forms of inequality, injustice in health is the most shocking and the most inhuman because it often results in physical death.”

The first Martin Luther King Day of the new decade is an opportunity to talk about the importance of advancing health equity in Alzheimer’s. From research participation to care, we know that equity and access must be center stage if we’re going to curb the impact of the disease on our communities and our economy. And we’re not alone in this commitment.

Earlier this month, Dr. Richard Hodes, Director of the National Institute on Aging (NIA) at the National Institutes of Health (NIH), released “NIA's 2020 vision: Continued advancements in aging research!” stating that it’s “absolutely essential to increase the number and diversity of participants in AD/ADRD clinical trials.” The post links to the NIA’s National Strategy for Recruitment and Participation in Alzheimer's and Related Dementias Clinical Research which outlines strategies to improve Alzheimer’s research participation.

Central to this strategy is the section that we co-authored with other experts in the field on improving diversity and inclusion of underrepresented communities in research.

This inclusion goal is not just the right thing to do, it’s imperative for good science and public health. The lack of inclusion of high-risk communities in Alzheimer’s research could undermine the generalizability of drugs and interventions developed to combat the disease. Currently, Latinos make up just 5.4% of NIH funded Alzheimer’s clinical research and African Americans make up 14% despite being 1.5 and 2-3 times more at risk of the disease, respectively. 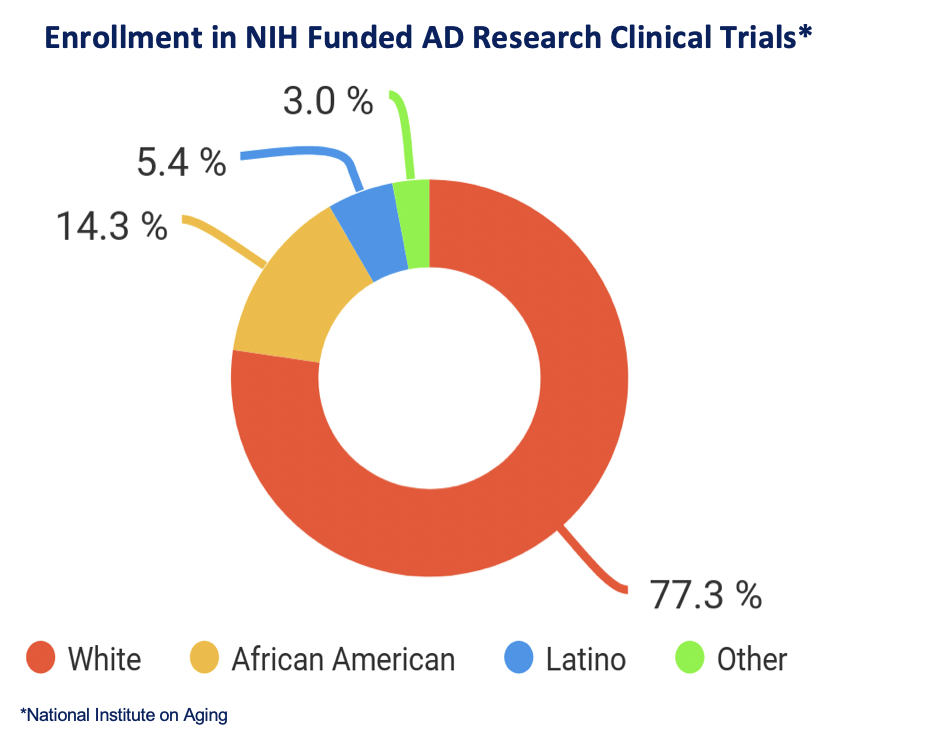 However, the field is slowly moving towards inclusion as a priority and the National Recruitment Strategy (page 20) outlined five steps on how to get there:

We applaud Dr. Hodes for reminding us about the importance of diversity and inclusion in NIA’s 2020 vision, but it will take work, resources, and commitment to make this vision a reality on a daily basis. The field must fully embrace equity if we’re going to turn the tide against the kind of injustice in healthcare that Dr. King spoke of in 1966 and that we still see today in the Alzheimer’s field and beyond. Dr. King understood the stakes are life and death.

All posts by Jason Resendez and Stephanie Monroe