Rural Americans, people of color, and those living with conditions like Down Syndrome would be disproportionately impacted by CMS’ dangerous proposal

Washington, D.C. (March 23, 2022) – Under a proposed rule from the Centers for Medicare and Medicaid Services (CMS), millions of people would be effectively denied access to new Alzheimer’s treatments because the limited number of CMS-approved clinical trial sites are situated mostly in hospitals in major cities and located in only 28 states.

In a press conference today, UsAgainstAlzheimer’s and the Global Alzheimer’s Platform Foundation revealed a map that shows that in 22 states representing nearly 54 million people there are no trial sites that would meet CMS’ guidelines for conducting clinical trials. 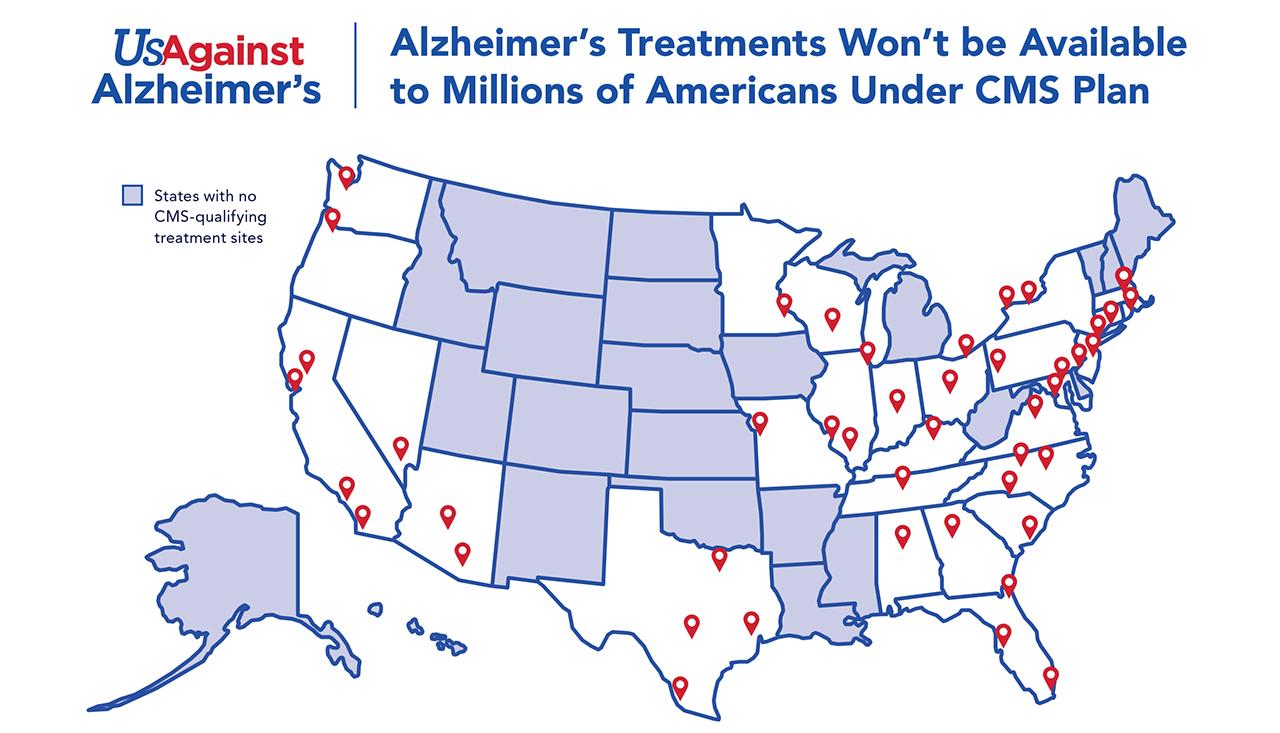 “I don’t know how anyone at CMS can look at the map and think their proposal is a good one,” said George Vradenburg, Chair and Co-founder of UsAgainstAlzheimer’s. “Medicare is planning to deny coverage for people who don’t participate in its trials but has made participation in its trials next to impossible.”

The draft coverage proposal would deny Medicare reimbursement for an entire class of new disease-slowing therapies except for patients taking part in CMS-approved hospital clinical trials. The proposal, due to be finalized by April 11, would allow Medicare coverage for only a few thousand while leaving nearly 2 million patients without access.

“This is very personal to me – I’ve watched my mom struggle with Alzheimer’s over the last several years and every time we see the doctors, I ask them if there is anything else we can do to slow this down, even a little bit. CMS’ draft coverage proposal will be detrimental to the millions of families and individuals suffering from this heartbreaking disease. More than 6 million people in America have Alzheimer’s disease and Latinos face 1.5 times higher risk of developing Alzheimer’s disease, and the problem is getting worse. The Latino population suffering from Alzheimer’s is projected to increase more than nine-fold by 2060,” said Rep. Nanette Barragán (D-CA). “For the past 20 years, Alzheimer’s patients and their families have been waiting, and this promising class of therapies gives hope to so many struggling families. CMS should not include this entire class of disease-modifying drug in their restrictive coverage decision. This is going to limit access to these therapies for millions of people who need it the most, including people of color and low-income people.”

The restrictions on access to these treatments are exacerbated because clinical trial sites are not located near large swaths of patients who might want to participate. Only about 64 hospital locations in the entire country are capable of running the types of trials CMS has proposed, so only people fortunate enough to live near one of those sites could feasibly secure one of the estimated 1,500 slots available each in those trials.

"Denying U.S. patients access to Alzheimer's treatments is closing the door to a quality life for people in underserved communities. So far there is no cure for this disease that affects so many families in our community and these medications optimize their life and its effects. At NHCOA we strongly urge CMS to change their decision that so severely impacts communities of color and privileges only a few," said Dr. Yanira Cruz President and CEO of the National Hispanic Council on Aging.

Some states like Nevada, Oregon, and Washington have a single site in major cities but getting to them can be incredibly difficult if you live in another part of the state, leaving those patients without access. There are also large areas of the nation with higher percentages of Black and Latino Americans where there is no nearby CMS-qualifying trial center.

“What CMS is proposing is disastrous; it will derail the drug approval process no matter how you look at it,” said John Dwyer, President of the Global Alzheimer’s Platform Foundation. “Each day that goes by without access, 1,000 Alzheimer's patients lose their opportunity to avail themselves of FDA-approved treatments because of CMS' uninformed proposed decision. We need CMS to wake up and take a close look at what they’re planning to do and how people will suffer today and for many years to come because of it.”

Even those who are able to travel to one of the trial sites may not be accepted. In its draft coverage determination, CMS said people with comorbidities would also be excluded. This includes people living with Down Syndrome, a population that is disproportionately impacted by Alzheimer’s.

An estimated 1,000 people per day slip from mild to moderate Alzheimer’s disease, which would take them out of the early stage where these treatments have been most effective. Those unable to participate in one of these clinical trials will have to wait as long as a decade for the completion of the trials and the possible removal of the Medicare coverage restrictions on this class of disease-slowing treatments. Over 10 years, more than 3.6 million people will move beyond the reaches of these treatments while we wait for the system proposed by CMS to play out.

UsAgainstAlzheimer’s and a range of scientists, patient advocacy groups and leaders have called on CMS to revise the coverage plan to provide Medicare coverage for all FDA-approved drugs.

For a copy of the map showing the CMS facilities discussed or to see a recording of the press conference, click here.

UsAgainstAlzheimer’s exists to conquer Alzheimer’s disease. We take on the toughest problems; bring all of “Us” together to break down barriers; advocate for research that will speed treatments to market; and drive changes that matter most to people living with the disease. We will not rest until brain-span equals lifespan - for everyone.

The Global Alzheimer’s Platform Foundation® (GAP) is a person-centric nonprofit dedicated to accelerating the delivery of innovative therapies for neurological disorders by reducing the duration and cost of clinical trials. Research centers across the US, Canada, and Europe are part of the growing GAP Network (GAP-Net). GAP supports GAP-Net research centers by assisting with study start up and recruitment activities, promoting diversity in research studies, and offering international clinical trial infrastructure, resources, and programs that champion brain health and the citizen scientists who make research possible.