If government, private industry, and the research community unite with a common goal and purpose, backed with the necessary leadership, resources, and incentives, the power of scientific research can be unleashed to deliver new cures and prevent and treat Alzheimer’s disease.

We have heard some say that Alzheimer’s disease is an inevitable part of aging. Others have claimed that it simply cannot be prevented or effectively treated anytime soon. Still others believe that we simply cannot afford to do what it would take to stop the disease. They are all wrong.

As men and women of science, we are united by a simple but bold belief: It is possible to prevent and effectively treat Alzheimer’s disease within our lifetimes, but only if our nation does what is necessary:

If government, private industry, and the research community unite with a common goal and purpose backed with the necessary leadership, resources, and incentives, the power of scientific research can be unleashed to unlock new possibilities, to deliver new cures, and to prevent and treat Alzheimer’s disease.

Affiliations are for identification purposes only and do not necessarily represent the endorsement of the affiliated institution.

Members of the network will be expected to

Each year, ResearchersAgainstAlzheimer’s (RA2) releases a report on Alzheimer’s drugs in late-stage clinical development and other related topics. Check out the latest reports. 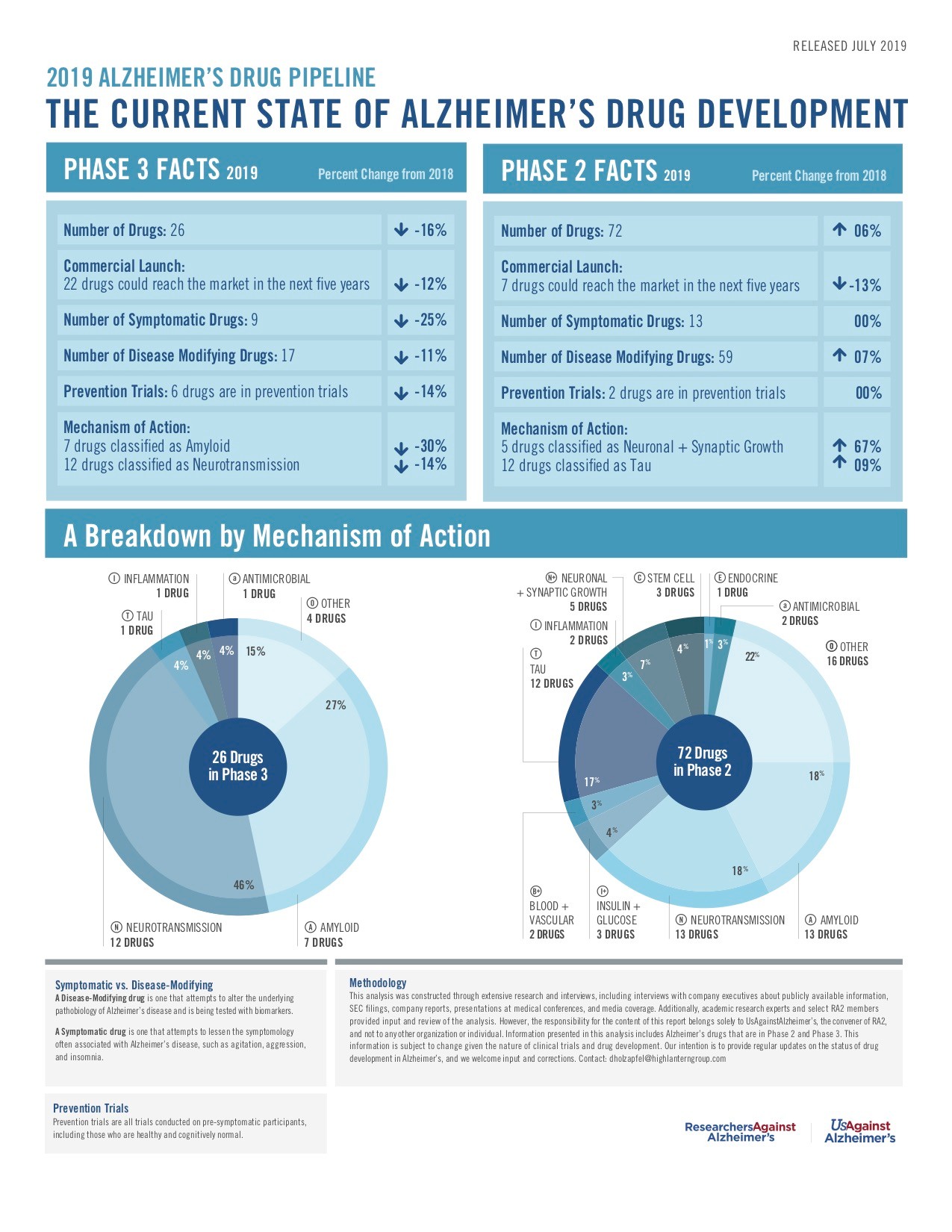 The 2019 Alzheimer's drug pipeline report showcases an array of approaches in development to treat the disease, including novel vaccines, gene therapies and interventions designed to target bacterial and viral infections associated with Alzheimer's. 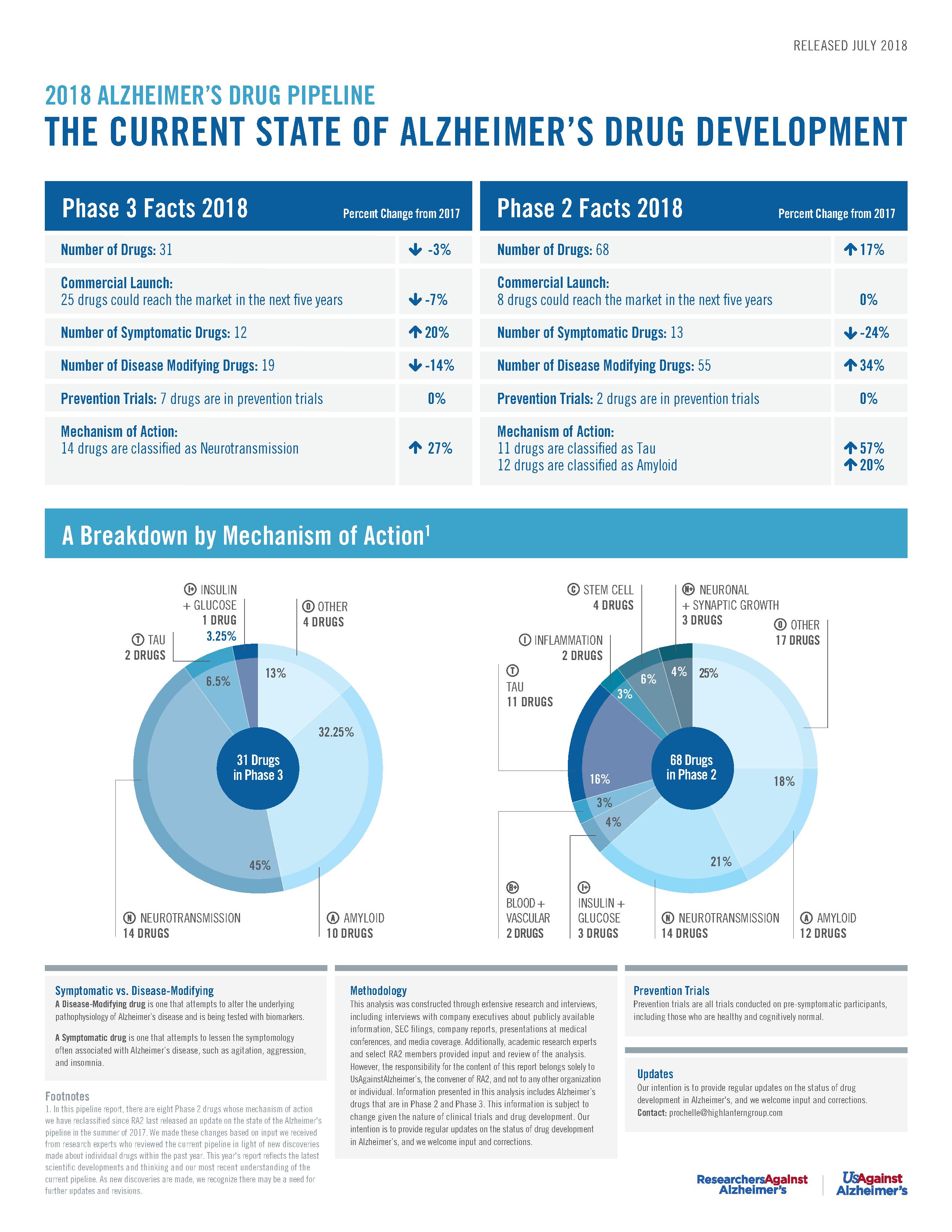 ResearchersAgainstAlzheimer’s calls on governments, industry, entrepreneurs, and world leaders to improve the healthcare system to respond to today's patients and caregivers and accommodate future Alzheimer’s disease treatments in its latest drug pipeline analysis. 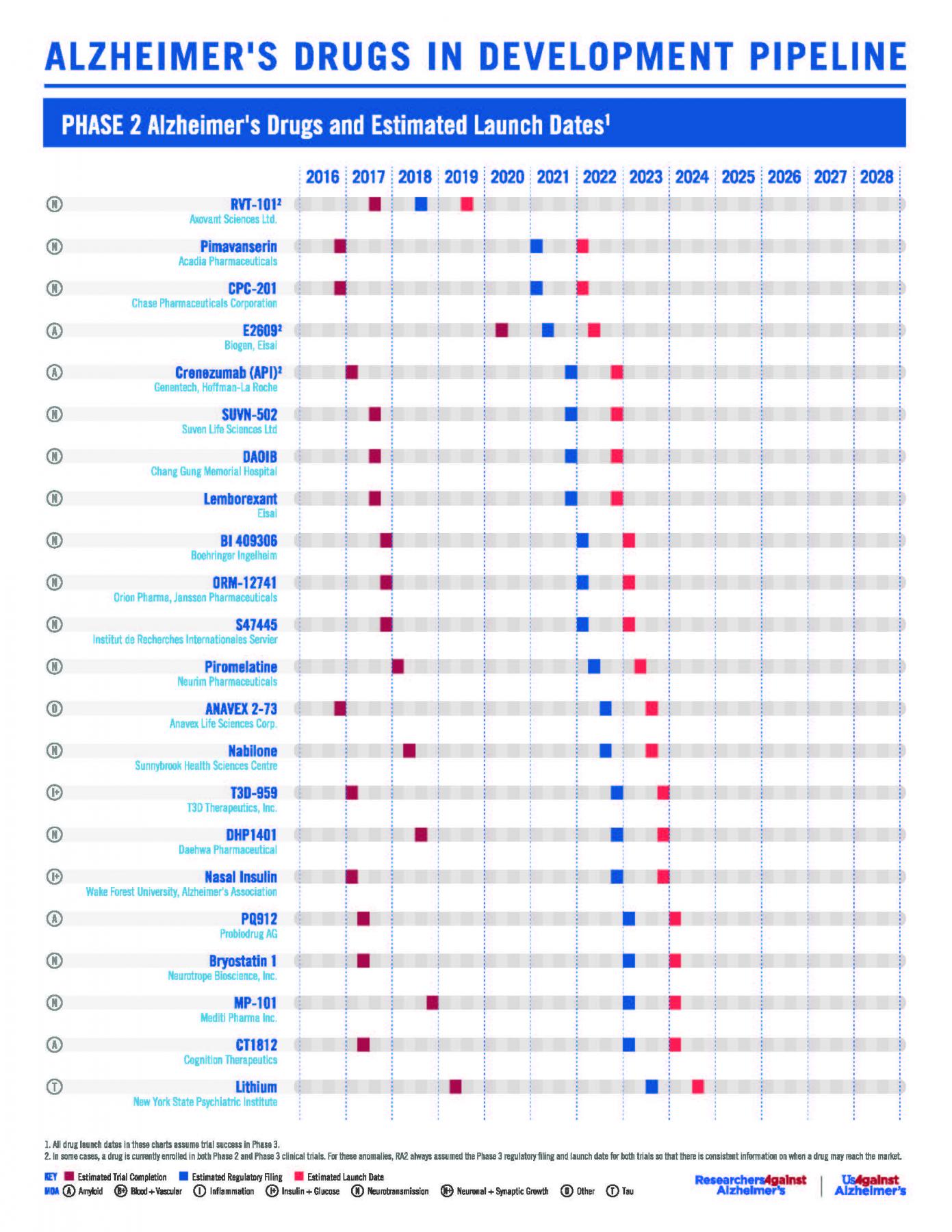 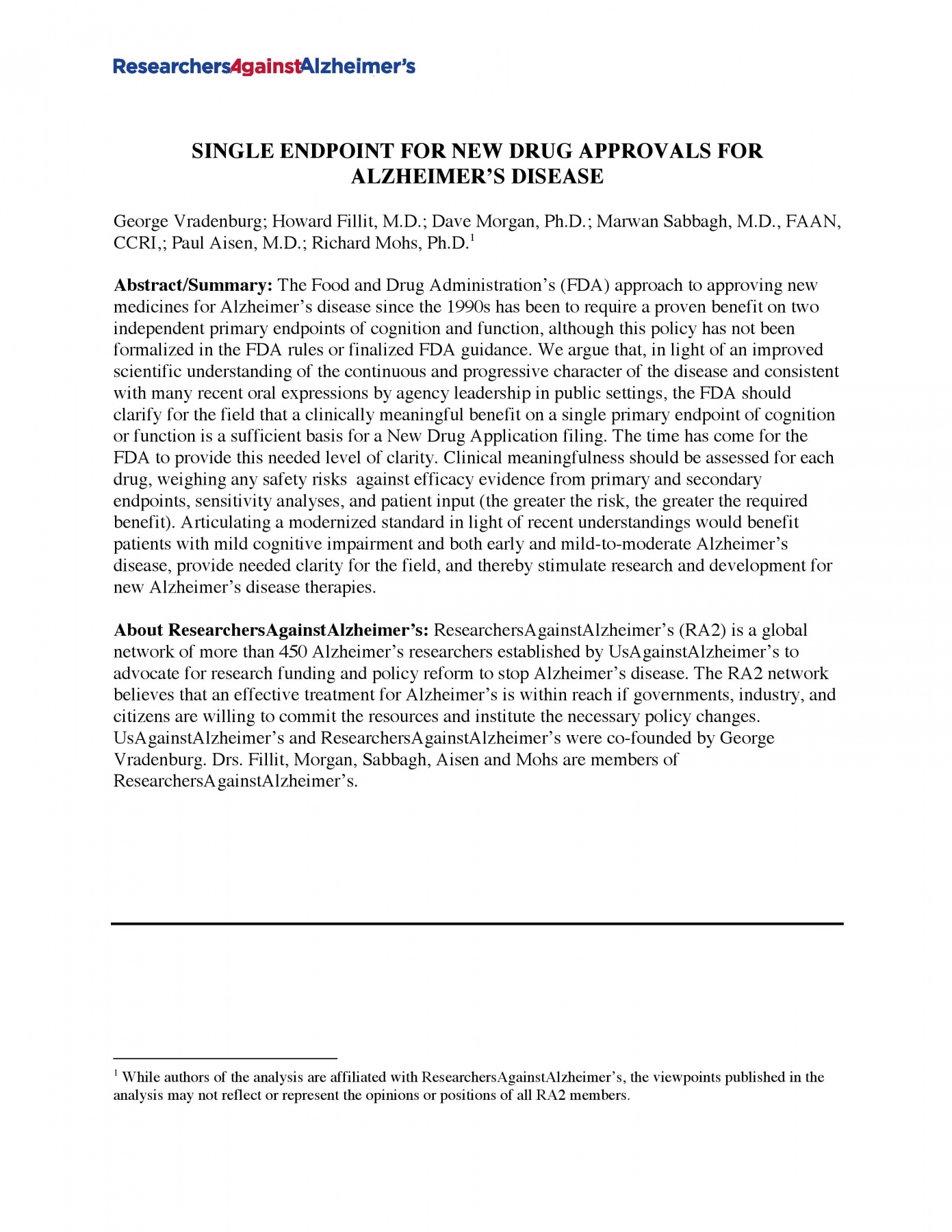 The FDA's approach to approving new medicines for Alzheimer’s disease since the 1990s has been to require a proven benefit on two independent primary endpoints of cognition and function, although this policy has not been formalized in the FDA rules or finalized FDA guidance. The FDA should clarify for the field that a clinically meaningful benefit on a single primary endpoint of cognition or function is a sufficient basis for a New Drug Application filing.

A new analysis of the Phase II Alzheimer’s drug pipeline, conducted by RA2, revealed 57 new Alzheimer’s drugs. According to the analysis, nearly twice as many mechanisms of action are being tested in Phase II as compared to Phase III clinical trials. 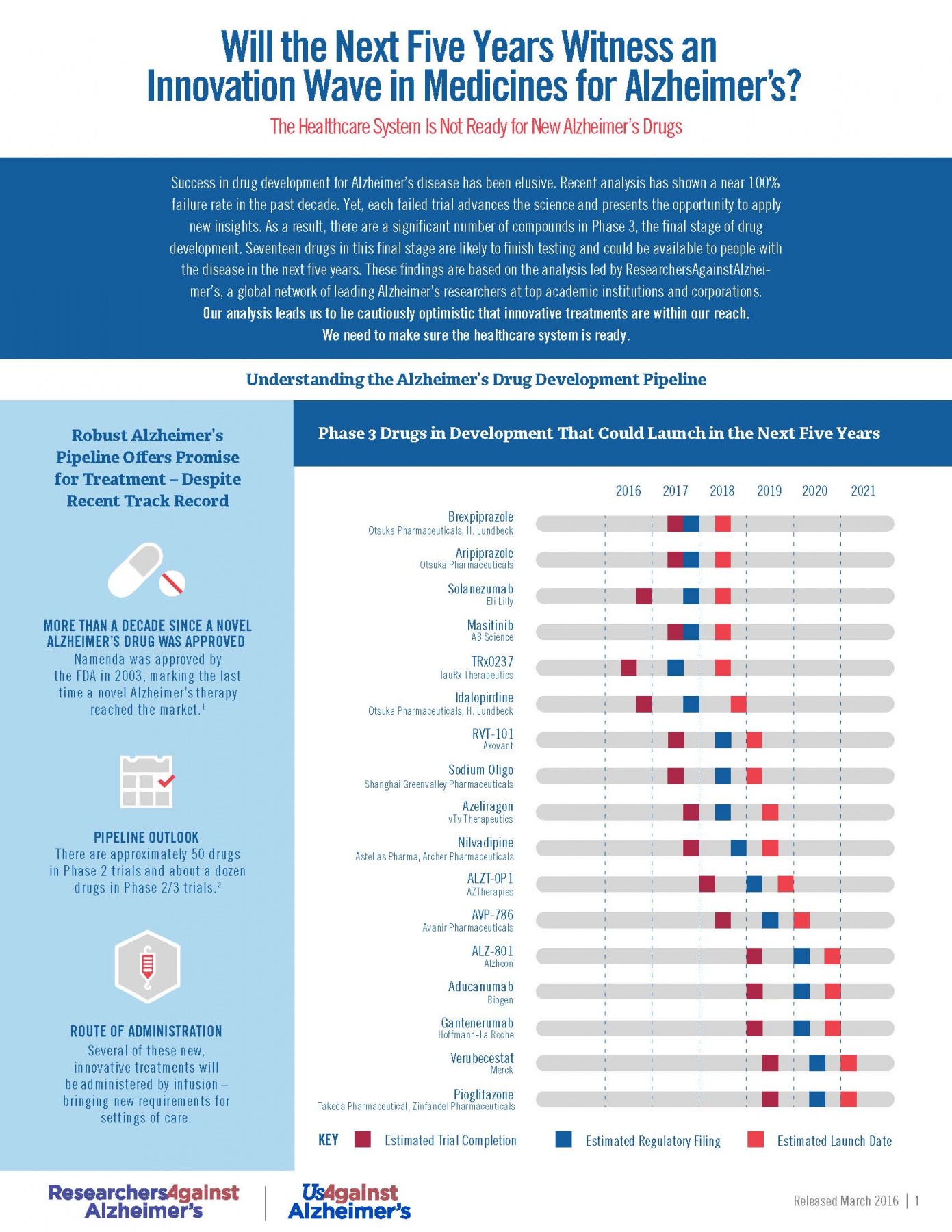 Today’s Alzheimer’s disease drug pipeline, marred by more than a decade of high failure rates and public underinvestment, is offering near-term promise with 17 drugs on pace to launch in the next five years, according to a recent analysis conducted by ResearchersAgainstAlzheimer’s.

We can stop Alzheimer’s but not without you. Thanks to your support, we’re able to continue raising awareness and fighting to bring an end to this debilitating disease: 100% of donations received by UsAgainstAlzheimer’s are devoted to our efforts to stop Alzheimer’s.