There is growing body of evidence that demonstrates the marked impact diet has on brain health, and the important role a brain healthy diet may have in preventing cognitive decline. With women at an increased risk for Alzheimer’s, it’s particularly important that everyone takes every precaution they can to promote brain health.

A brain healthy diet is a key component of living a more brain-healthy life. We are excited to be taking part in a Be Brain Powerful LIVE episode on Wednesday, May 27, at 6 PM EDT to share one example of a brain healthy diet.

Vin will be demonstrating how to prepare one example of a brain healthy diet:  Pan Seared Salmon with Turmeric Spiced Quinoa and Chard. This meal is inspired by the MIND Diet and incorporates Turmeric as an added brain health bonus. It is high in healthy fats and has ingredients chock full of brain healthy nutrients. You can register here for the episode, and below is the recipe.

1. For the quinoa, heat the olive oil in a medium saucepan over medium-low heat.  Add the onion and garlic. Add the salt. Cook until the onions are soft, stirring often. Add the turmeric and curry. Cook for 30 seconds. Raise the heat to high and add the water and quinoa. Bring to a boil and reduce the heat. Simmer for 12 minutes. Turn off the heat and cover the pot. Allow the quinoa to steam for 10 minutes. Remove the lid and fluff the quinoa with a fork.

2. While the quinoa is cooking, prepare the chard. Heat the olive oil in a medium Dutch oven or skillet. Add the garlic and cook until golden, stirring often.  Add the chard and salt. Stir well. Cover the pot and cook until the chard is tender, stirring occasionally, approximately eight minutes. Set the chard aside.

4. To serve, combine the quinoa and chard. Place 1/4 of the mixture at the center of the plate. Place a portion of salmon on the mixture. Repeat the procedure three more times.

Please join us Wednesday at 6 PM for this brain healthy diet episode! 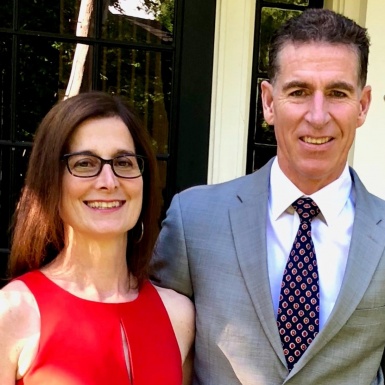 Vin Connelly and Dr. Hope Ricciotti are the co-authors of several cookbooks on women's health. Vin is an accomplished chef and Hope is the former chair of Obstetrics and Gynecology at Beth Israel Deaconess Medical Center in Boston, Massachusetts.

All posts by Vin Connelly and Hope Ricciotti