I see my role with my dad as a caring son, not a caregiver. I travel and work closely with him on his dementia journey and with speeches and interviews around the country about his book, On Pluto: Inside the Mind of Alzheimer’s. If anything, my mother is the caregiver. But dad is a stubborn Irishman, a loner in good ways, and that keeps him going for now, for as long as it may be possible.

Senior O’B. is a wild card, as unpredictable these days as the reshuffling of a deck of cards. One never knows what card pops out. Sometimes he’s the Joker; other times he’s the Ace!

I love my dad and would do anything for him. Dad throughout my life has stood up for me. Now I’m trying to stand up for him. Father’s Day is a good reminder.

I’ll never forget the time I was playing Pop Warner football many years ago. As a running back, I took a handoff to the left, found a hole, and raced down the sideline toward the end zone sixty yards away. My dad was running on the sideline with me, cheering all the way, as he always would for me. About ten yards from the goal line, I was tackled from behind. I braced the fall with my right hand. There was a crack. Within a second I was in deep shock. I had shattered my wrist in two places, a compound fracture.

My dad rushed me to the hospital in his rusted, red Jeep. With each bounce of the Jeep, I felt excruciating pain. My dad kept trying to keep my mind off the pain by mimicking a Boston Red Sox announcer describing a game-winning pitch by then Sox Ace Pedro Martinez. “Strike three!” It worked to some extent. X-rays revealed that an operation was necessary. I was so scared. My dad stayed with me that night in the hospital, in a cot next to my bed, holding my hand. I can still feel his touch.

Now my dad is scared, and I’m holding his hand as he stares down the demons of his Alzheimer’s disease.

We have much in common—physically, emotionally, and in how we often think. Over the years, my dad has sacrificed, as all good fathers, to care for me, my brother Brendan and sister Colleen.

A few years ago, when dad told us about his diagnosis, we all feared the worst, but deep inside we all knew that he was going to put up a fight. He has a deep faith in God. So I signed up for duty, becoming his day-to-day associate, at home and on the road, helping him edit, participating at times in speeches and interviews, traveling with him, finding his phone, laptop, and car keys scores of times a day when he loses them and drops loud F-bombs.  My job description, as we joke, is to try to make sure dad “doesn’t lose his shit.”

My dad and I have grown through the process, learned more about each other, have become much closer.

Dad’s bad episodes now outweigh the good ones, but I cherish each time I see that he’s having a good day for whatever reason.

Dad could always light up a room with his smile, charm, humor, and presence; still does. It’s muscle memory. He can captivate a room in an instant with his charisma and his words. He can draw in an audience at the drop of a hat. But bad days now for him now are as common as the sun rising in the morning. His ability to adjust, put a smile on, and strive on is as courageous as it gets.

When rage overtakes reality in Alzheimer’s, dad lets out much rope, like the spool of a fishing rod. I can’t stop him, a hail of bullets couldn’t stop him, so with great reluctance, I just let him go….

When dad asks me to speak on the road, often I’m not sure what to say, so I speak from the heart, as he has taught me. I talk about what I notice now, such as the anger, confusion, and dislocation that he goes through daily: his increasing day-to-day short term memory loss, whether it be asking where his keys are when they’re in his hand, reaching for his Big Bertha driver on the golf green, thinking it’s his putter, or calling out for our dog Sox before she died when Sox was sitting at his feet. I’m not sure mentally where dad is at those times, but those blank stares are so peaceful. Out on Pluto, he’s calm, not stressed, and honestly seems not to have a care in the world.

That’s the silver lining of this disease. Learning to deal with it.

So often, Dad won’t let us in. But I think his faith and humor really helps in fighting this disease. He takes pride every day in waking up and giving Alzheimer’s the finger.

My time with my father, and who he was, is now fleeting. I know that. Yet I know that the journey I’ve been on with him will sustain me forever. Through good times and bad, dad is the same loving father and possesses a heart-warming soul that will never leave him. 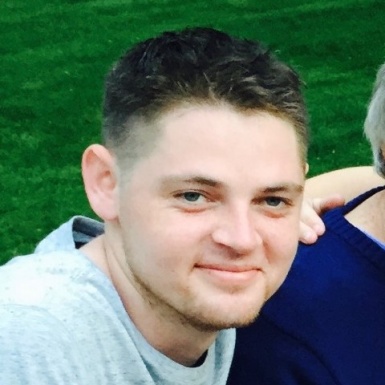 Conor O'Brien is a caring son to his father Greg who is living with early-onset Alzheimer's disease.

All posts by Conor Michael O’Brien