Editor’s note: Reverend Tracey Lind and Greg O’Brien joined together in a video conversation on March 26 about their thoughts on living with dementia during the COVID-19 pandemic. Tracey is the retired dean of Trinity Episcopal Cathedral in Cleveland, Ohio and has Frontotemporal Degeneration. Greg is author of On Pluto: Inside the Mind of Alzheimer’s and has early onset Alzheimer’s This is the first of what will be a series of conversations over the coming months in which they discuss issues of the day and topics important to them as people who are living with dementia. This conversation has been lightly edited for clarity.

Tracey Lind: I’m in Cleveland, Ohio where our Governor has been fairly aggressive in social distancing and stay-at-home orders.  I know people with coronavirus.  Some of my Episcopal clergy colleagues were people who got the virus early on. So, you know I’m trying to be really, really careful because a few years ago I got pneumonia, and it was after getting pneumonia that I did my slide into dementia. I’m not saying that’s what caused the dementia. But shortly after I got sick, it came on. And I’ve been working really intensely for a couple of years now to get better and to manage FTD better. And I’m doing really, really well. So honestly, I’m a little scared of getting coronavirus because I don’t know what it would do to my brain again.

But the other thing is that a lot of our work has been traveling around the country talking about this disease and trying to destigmatize and educate people about dementia. And obviously that work is completely shut down for a while. So, I’m trying to find a routine of “what do I do?” But I don’t think that’s different than a lot of people. I don’t get confused a whole lot. I do get anxious. So, I’m working really hard to manage my anxiety.

One of the things I’m doing is making phone calls to a retirement community where there’s not a chaplain. So, I’m being a telephone chaplain, and I’m talking to some people in the memory unit and they’re very confused. People with advanced dementia don’t understand what’s going on. They don’t even know there’s anything wrong necessarily. There’s one guy who thinks he’s on a cruise ship. And they keep telling him he can’t get off because there are people sick in the port. And he’s like, “Ok, I’ll just stay on the cruise ship.” And another one of my friends there says, ‘It’s really quiet here. And they don’t want us walking around and I don’t know why.” So, I think for people with dementia who don’t understand what’s going on in the world, this is bringing out a level of anxiety that probably is very frightening.

Greg O’Brien: My answer might be a little different. I’ve noticed heightened confusion, rage and anger. I’m here at home with my wife, Mary Catherine, and son, Conor, and I’m shouting and screaming and forgetting more and more. And I’m not understanding what’s going on. And on top of that, I’m still fighting off the residue of bronchial pneumonia that I had five months ago. And my doctors tell me that with the journey I’m on – I also have prostate cancer – that my immune system is horribly compromised. So, I’ve been told to stay away from everyone. But my wife and son are still here. And I find myself yelling at them and apologizing a lot. So, this is a joke, so you can laugh…I found my wife the other night on social media just checking senior dating scenes. There’s a thing called Silver Singles. That’s a joke – okay no one’s laughing. But it’s confusing and just following what’s going on – anyone’s who’s watching knows, it’s totally freaking confusing what everyone’s saying. Please bi-partisan, genius in medicine and bi-partisan, genius in the economy tell me what the hell is going on.

Tracey: You know, Greg, I’m not sure that’s Alzheimer’s. I think that’s a lot of us.

These are things that I know: my short-term memory is pretty compromised. I am having a hard time reminding myself to be really good about washing my hands and using Purell and all of that stuff. And I get scared. I get obsessed with watching the TV and then I get scared. Like a lot of senior citizens, I don’t like to think of myself as a senior citizen. But I too had bronchitis recently, and I don’t like to think of myself being in that at-risk population. But I know that I am. And I know that if I get sick it’s going to be really hard.

But the thing that really scares me is if something happens to Emily. And I think that’s what she’s really scared about is, what if something happens to her, who’s going to take care of me? And I’ve been watching Emily scrambling around making sure that all of our vital information is in a location where I can manage it for as long as I can manage it. I know she’s made phone calls to the power of attorney folks to say, you know, “I’m putting things in order just in case.” I think it’s just bringing the reality of our mortality.

Greg: I think that’s true and it’s exacerbated because I have to fight off bronchial pneumonia now. And I can’t fight off the symptoms from Alzheimer’s and dementia. So, I feel deeply, deeply depressed. And it’s very concerning.

Tracey: You know I’ve been on some of the support group Facebook pages of the folks living with frontotemporal degeneration (FTD). And part of what helps you manage it, and I assume it’s true for Alzheimer’s too, is keeping to a routine and a schedule. And also, daily interaction with certain people, especially when it becomes more advanced and you can’t go out. But I know for me that routine is what keeps me healthy. And that routine has gone to hell in a hand cart right now.

So the people I want to have coffee with and the yoga class I want to go to, and all the things I want to do, and I know that’s what my friends with FTD are saying on the Facebook pages, without our routine we’re feeling more isolated and helpless. And we’re not in the working world where you can do something about it.

Greg: The going for coffee – I’m not allowed to drive, so my son will drive me or if I’m going to the gym. You know I can’t do that now. And so, I feel the isolation, I feel the loneliness, the confusion, even more than what I was feeling before. The short-term memory has gotten worse. And then the confusion, so there’s anger here. Can I tell you about the anger beyond just exploding and dropping F-bombs with people?

First of all, I have total love and sympathy for all the people who are sick right now with coronavirus. As a journalist, I look at the numbers, the numbers of people stricken and dying from the coronavirus. And I’m still on board with the shelter-in place because I think that’s preventing other people from getting it. But let me cut to the quick here. What so upsets me, and I’m hoping, which it will, that the coronavirus passes, and that people will start to say what else did we miss?

Right now, 44 million people who are suffering in the world with Alzheimer’s and other forms of dementia and nobody says a freaking boo about it. And I find that insulting. And I find that having lost a maternal grandfather, a mother, a father to these demons, it’s just who we are as a society. And I understand nobody wants to do anything until there’s a crisis. But God damnit there’s a crisis in Alzheimer’s.

Tracey: I hear your anger. You and I know, Alzheimer’s and FTD and other forms of dementia, they’re not contagious. I mean people sometimes think they are but they’re not.

I think two things. One is I think this is going to distract from the research and advocacy that we were starting to see some progress on for the various forms of brain disease that cause dementia and that’s upsetting to me. The AFTD annual conference was cancelled, which is when all the researchers in this area come together.

But two other things that I would raise from a public policy standpoint that make me angry is this crisis is showing how broken our medical and health care system is. And I resent our president having the audacity to say he inherited a broken system and now he’s going to fix it. I think that is just utter egotism and narcissism. But I also am upset because I think this is going to wipe so many people out financially who are really counting on having some resource to deal with long term care for Alzheimer’s and FTD and other dementia. And that really scares me.

Greg: Amen to that.

Tracey: Greg, I just wanted to tell you to take care of yourself and be smart right now. You know what I mean? Be smart and try to count to 100 before you yell too much at people who really love you the most.

Greg: Okay, I love you too. You guys take care. I’ll look forward to the next talk. 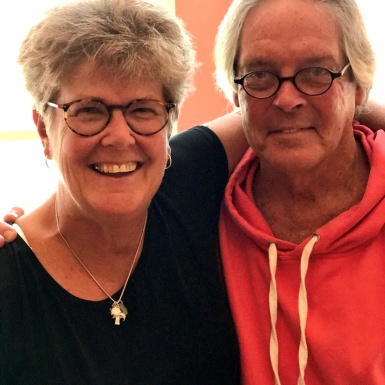 The Very Reverend Tracey Lind is a retired Episcopal priest, photographer, and author of Interrupted by God: Glimpses from the Edge.  She has Frontotemporal Dementia and writes a regular blog about it at www.traceylind.com.Greg O’Brien is author of On Pluto: Inside the Mind of Alzheimer’s, the first book written by an investigative journalist embedded inside the mind of Alzheimer’s

All posts by Reverend Tracey Lind and Greg O’Brien