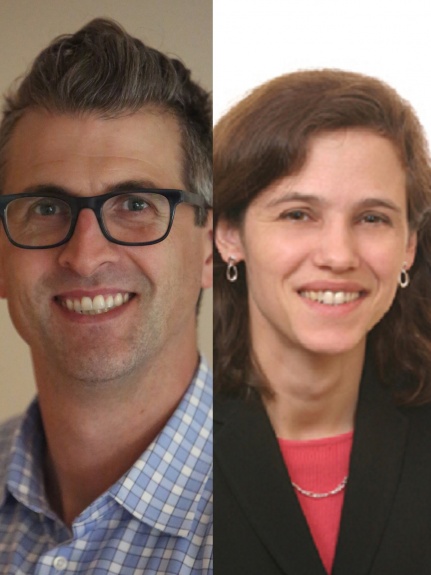 What if a blood test or other simple exam could one day detect Alzheimer’s? Scientists are in pursuit of ways to test for Alzheimer’s by measuring a biomarker, any substance in the body that may indicate or rule out the presence of a disease. Currently many people with Alzheimer’s are never diagnosed by a physician—or are diagnosed at a very late stage. Broad availability and adoption of a blood-based test in clinical practice could make Alzheimer’s diagnosis more common in the future by helping to identify who should progress to more comprehensive biomarker confirmation (e.g., PET imaging) so doctors might be able to intervene before symptoms appear. No such test exists, but where do we stand on developing one, what are scientists pursuing, and what might the implications be for those who take it?

We spoke with two experts about this exciting area of research. Scott Lewis, Director, Alzheimer’s Disease Diagnostic Pathway at Biogen, works with stakeholders to understand and address the current and future challenges of screening for and detecting Alzheimer’s disease. Melissa Bianchi is an expert in patient protections and health privacy at the Washington, DC, office of the law firm Hogan Lovells.

Press the 'Play' button under the image at left to hear the full conversation.

A biomarker is something measurable in the body that can indicate normal health, the presence of disease, or a treatment’s effectiveness—like cholesterol levels in the blood.

As Scott Lewis noted, the process today varies widely for diagnosing Alzheimer’s. Once patients make their way to a specialist, they will likely undergo a battery of cognitive and functional tests, followed by a more comprehensive differential workup that could include blood tests for vitamin deficiencies, MRI to rule out other neurological disorders, and in some cases even more comprehensive cognitive and functional tests—all to reach a diagnosis only of probable Alzheimer’s.

In the near-term, to help confirm Alzheimer’s, we remain hopeful that diagnostic tools such as PET scans or CSF biomarker testing will become more accepted and utilized in the diagnosis and treatment of patients.

While progress is being made on less invasive biomarker tests, those may be years away. In a blood test, we may see something sooner that’s a screening tool, to indicate whether to do PET or CSF testing. Any test that might replace PET or CSF testing is not expected in the near-term, and we may see that we use a series of biomarker tests, not simply one test and you’re done.

Research is looking at biomarkers in saliva, in the retina and in urine. Tests like these that would be minimally or non-invasive are in their early days, compared to PET and CSF, which have a stronger base of clinical validity and pool of data.

Lewis noted a need for the health care field to reach a standard process for the Alzheimer’s diagnostic “path” from primary care to diagnosis, treatment and monitoring of prospective treatments.

Today, biomarker-based tests for Alzheimer’s are available, but they’re not always reimbursed. That may change once we have traction on a treatment that modifies the disease.

Impact on Patients: Preparing for a Diagnosis

In the future, if biomarker tests allow diagnosis at an earlier stage of Alzheimer’s, new questions will arise. For instance, once someone receives a confirmed diagnosis, even if they have no symptoms, they may worry that their employment, driver’s license, or health or life insurance could be at risk.

Melissa Bianchi noted that early detection allows for longer-term family dialog and planning, such as advance directives and estate planning, all while the person with the disease can still participate. We need to address any issues that might discourage families from taking advantage of this opportunity.

Bianchi said we will need legal and policy protections for individuals who are diagnosed early. Today, since diagnosis happens later, the relevant laws view Alzheimer’s as a single condition—its later-stage form. We must identify places where existing laws do not take into account all stages of the disease. If a law says that when you reach a certain point in Alzheimer’s, your driver’s license may be up for consideration, that should not be applied to everyone in a blanket fashion. As we identify state or federal legal barriers, we need to put protections in place for Alzheimer’s patients and families. She indicated that work is underway to do just that.

In 2019, UsAgainstAlzheimer’s will publish an analysis of biomarkers in development. We want to understand and share this information to help the market become ready when they are introduced.

Anyone interested in participating in a study on biomarkers may search Clinicaltrials.gov or TrialMatch. By participating in clinical trials, patients may access innovation that is not available elsewhere.

This Alzheimer's Talk was generously supported by Biogen.